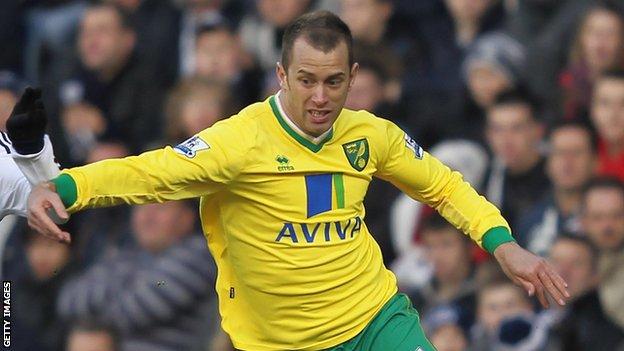 Norwich City boss Paul Lambert has revealed he has been "inundated" with approaches to take striker Aaron Wilbraham on loan.

The 32-year-old has made impressive cameo appearances in recent weeks after barely featuring in the first half of the season.

Lambert told BBC Radio Norfolk: "The number of teams that have phoned to take him on loan has been incredible.

"We've been inundated with people wanting him and I can understand why."

Wilbraham, a signing from League One MK Dons in January last year, has made just eight starts in his 14 months at Carrow Road, scoring once.

But the tall frontman has shown promise in his appearances off the bench in the Canaries' last three outings - an FA Cup loss to Leicester and Premier League defeats by Manchester United and Stoke.

"For someone in their early 30s he's been brilliant for us, not just on the pitch but off it," added Lambert.

Wilbraham's chance in the first team has come at the expense of Steve Morison, who has only started one of Norwich's last five games, despite scoring eight goals in his debut Premier League campaign.

"He had an ankle knock that was giving him some concern a few weeks ago," explained the City boss.

"We decided to leave him out and give him a break. He's been leading the line the majority of the season between him and Grant Holt.

"He's been a huge part of what's happened here. He'll be OK. Rest is sometimes a good thing."

And Lambert has ruled out the possibility of one of his defenders joining Peterborough United on loan.

Posh boss Darren Ferguson had queried why Ryan Bennett was not allowed to return to London Road until the end of the season after joining the Canaries in January.

The England Under-21 international was loaned back to the Championship club for one month after securing his switch.

Lambert said: "If you spend money on something you're not going to wait six months for it are you?

"I spoke to Darren a few weeks ago and told him the situation with centre-halves. He was fine."

And he has rebuffed claims from Posh that they were due a separate loan player as part of the Bennett loan deal, adding that he had no defenders to spare because of an injury to Daniel Ayala.

"We never had any option to let anybody out because of the injury situation and it's still the same," the Scot added.

"I've not got any players. They're injured. So who can I let out?"