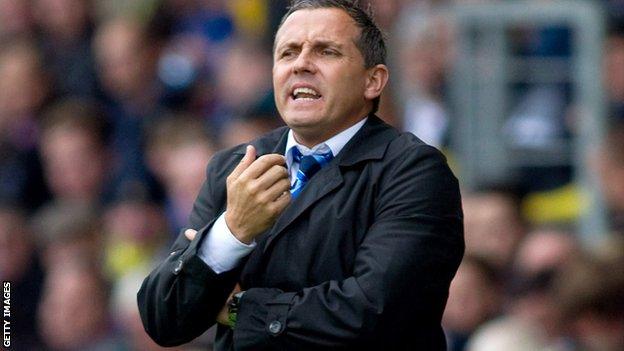 Buckle guided Torquay to the League Two play-off final last May where they were beaten by Stevenage.

He left soon after for Bristol Rovers but was after a poor run of results.

Buckle was at Torquay for four years and guided the club out of the Blue Square Premier.

He says a lot of the success at Torquay is down to the foundations he laid at Plainmoor.

"I'm sure he wouldn't mind me saying that he's inherited some really good staff in Kenny Veysey and Damian Davey," added Buckle.

"Sometimes those people get forgotten and they do an incredible job. He also had a really good young side, but he still had to add to that and he's done great."

Buckle took goalkeeper Scott Bevan and striker Chris Zebroski to the Memorial Stadium from the Gulls in the summer, as well as signing former Torquay players Mustapha Carayol and Craig Stanley.

And Buckle believes Ling was the perfect person to replace him at Plainmoor.

"By his own admission Martin didn't do the best job in the world that he would have liked to have done at Cambridge, but you mustn't forget what he did at Orient, he did a fantastic job there.

"When you look at it he was the ideal candidate, so you have to congratulate him, but he'll know, and I've read his comments, there's still a long way to go this season, but he's doing an excellent job.

"Certainly Torquay are good enough to go up because they've got a good goalkeeper and they're not conceding goals.

"They're edging games one-nil, they're very resilient, hard to beat and hardworking

"If Torquay can win tomorrow [Saturday] they're really going to put a marker down."