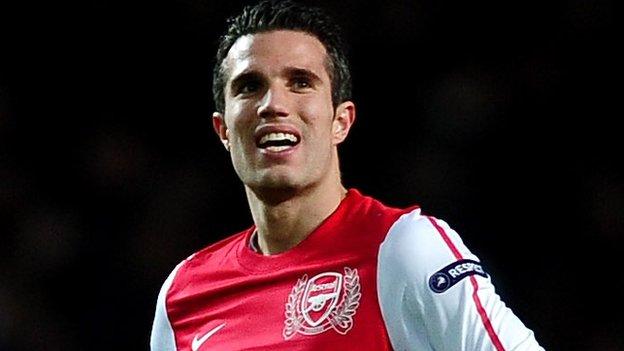 Van Persie is yet to agree a contract extension beyond summer 2013, while BBC Sport understands Arsenal have agreed a deal to sign Podolski, 26.

Manchester City manager Roberto Mancini said this week that he was interested in signing the Dutchman.

Wenger said: "Our plan is to keep Robin van Persie even if we buy any player."

Discussing Manchester City's interest in Van Persie, he added: "What is said of you by other clubs is part of the job.

"What is important is how much you want to win the next game. All the rest is basically not important.

"Robin is the leader of our club. He is under contract until 2013. You do your job, which he does very well, and enjoy your games."

The German will have to pass a medical and agree personal terms before any move can be completed in the summer.

Wenger said: "I don't have a lot to say about that because, if we sign a player, we will inform you. At the moment we have not signed anybody.

"There is still no agreement. Podolski is a good player. I wouldn't deny that."

The Arsenal manager told German media that he thinks highly of Podolski's passing and shooting ability - and is also impressed by the way he can integrate himself into a team's pattern of play.