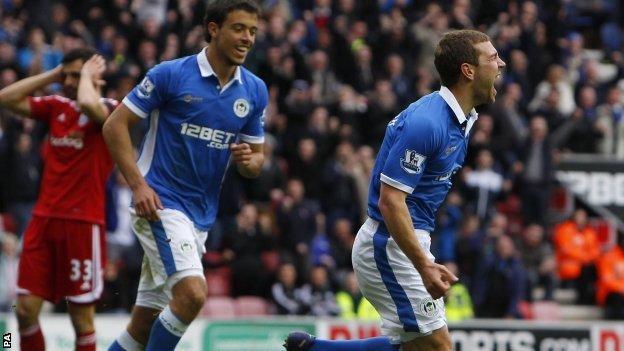 Wigan remain bottom of the Premier League after missing numerous chances as they were held by West Brom.

Franco di Santo volleyed over and wide before Albion keeper Ben Foster tipped a third effort from the striker over.

Emmerson Boyce then stooped to head one of several teasing Jean Beausejour crosses onto the woodwork while James McCarthy hit the bar before half-time.

James McArthur tapped Wigan in front from a couple of yards after the break but Paul Scharner headed Albion level.

A win would have taken Wigan out of the relegation zone but their wastefulness in front of goal proved costly.

The Latics have struggled to score at the DW Stadium all season, netting 12 times in 15 home games, but the early signs that they would significantly add to that tally looked promising.

Chilean Beausejour provided the main attacking threat down the Wigan left and he set up chance after chance with a series of sweetly hit crosses that his team-mates were unable to convert.

Di Santo volleyed over from an acute angle inside the opening 30 seconds before squandering the first of Beausejour's centres moments later when he sliced another volley wide.

The visitors, who ventured north with almost 5,000 supporters in tow, struggled to get a foothold in the game and they were indebted to the woodwork twice for keeping the scoreline level.

First Boyce was unable to keep his header down after timing his back-post run to perfection to meet Beausejour's cross into the six-yard box, then McCarthy rattled the bar with a 20-yard drive.

But Wigan's endeavour was rewarded soon after the break when Victor Moses showed tenacity to force his way to the byline and when his fiercely hit cross was not cleared by Billy Jones, McArthur had the simplest of tap-ins.

The goal sparked the visitors into life and Jerome Thomas fired an effort wide as they started to show some glimpses of the form that has brought them six away wins this season.

And they levelled with their first effort on target, midfielder Scharner stooping to nod in Chris Brunt's deep corner - his muted celebration showing respect for his former club's plight.

An ugly melee, sparked by Youssouf Mulumbu's unnecessary shove in the back on McArthur, threatened to spoil a largely entertaining game.

Several players joined in and the Albion midfielder was booked for his reaction to McArthur's challenge, while Thomas and Boyce joined him in referee Michael Oliver's notebook.

Wigan had their chances to win the match but Mohamed Diame dragged an effort hopelessly wide and into the midriff of Di Santo, before substitute Albert Crusat's dangerous cross was deflected onto his own post by Gareth McAuley in injury time.