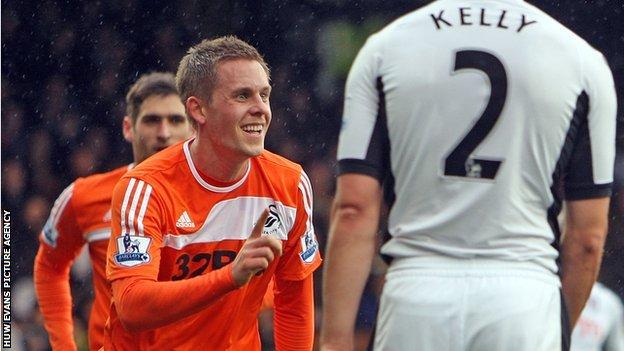 The midfielder struck again after the break with a controlled finish from Wayne Routledge's cut-back.

Joe Allen completed a comfortable victory with an 18-yard effort after pouncing on sloppy Fulham play.

The third goal, which came towards the end of a second half of almost uncontested authority, was indicative of a strangely flat display from Fulham, who were unbeaten at Craven Cottage since December.

Swansea, riding high on confidence since toppling Manchester City, became only the fourth side to win at Fulham this season and collected a third away win in four attempts.

The hosts' capitulation was all the more baffling after Martin Jol's side had made a bright start in which visiting goalkeeper Michel Vorm had to save well twice inside the first four minutes.

Clint Dempsey's 18-yard drive was tipped over and then the Dutchman dived low to his left to save Moussa Dembele's effort.

Swansea also had early sights of goal as Danny Graham tested Schwarzer and Sinclair drove into the area after an awful Brede Hangeland pass.

But the game soon went flat and the fans had to wait until after the half-hour mark to raise their voices again. When they did, it was the away contingent who were singing.

Fulham were given two warnings as Sigurdsson's low drive went inches wide and then Schwarzer made amends for his own poor clearance to deny Sinclair.

But the Australian goalkeeper had little chance with the opener on 36 minutes.

Routledge found Sinclair at the far post and his volley across the face of goal was pounced upon by a diving Sigurdsson.

The home side showed greater urgency after the break but the visitors soon reasserted their dominance with trademark possession football.

Having starved Fulham of the ball, they doubled their advantage with ruthless efficiency.

Sigurdsson, in space inside Fulham's half, freed Routledge down the right and the winger's cut-back inside the box was delivered perfectly for the Icelander to stroke past Schwarzer.

The former Reading midfielder has now scored five goals in nine Premier League appearances since joining on loan from German side Hoffenheim in January, and Swansea can expect to face plenty of competition for his signature at the end of the season.

Fulham also recruited from Germany in January, and Pavel Pogrebnyak has also proved to be a shrewd capture.

But the striker, who had scored five goals in four matches, barely had a touch as Swansea coped well without centre-back Ashley Williams - illness causing him to miss his first game after 169 consecutive appearances.

Philippe Senderos was the guilty party as he conceded possession in his own half, allowing Allen to drive down the left wing.

The midfielder cut in towards the penalty area, causing Senderos to slip, before firing in low from 18 yards past Schwarzer's weak attempted save.

At the other end, Vorm was far sharper as he pushed Dempsey's effort on to the bar before Sinclair wasted a glorious opportunity to add a fourth in the dying stages.