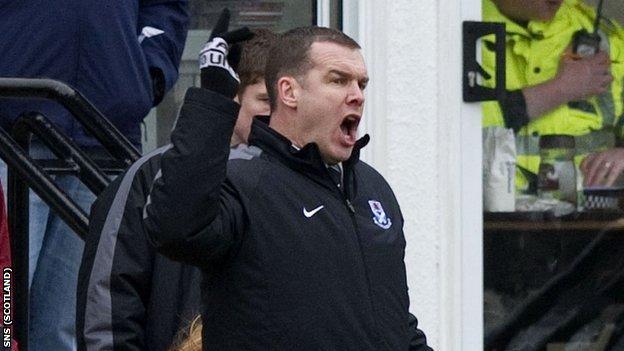 Hibs' second goal came from the spot after Andrew Geggan was adjudged to have fouled Isaiah Osbourne.

But referee Steven McLean waved away claims of handball against Matt Doherty in the Hibs box in the second half.

"It didn't seem to go our way. To say we feel hard done by is an understatement," said Reid.

"He's the only person in the whole ground that sees it as a penalty kick and it changes the whole game; they get a lift, 2-0 up.

"It was hard to come back from that, so we're obviously majorly disappointed.

"You see people holding each other in the box and some players are quite good at making a meal of it. I didn't see any Hibs players appealing, which is always tell-tale sign.

"A lot decisions seemed to go against us and that's not me being bitter. The Premier League team comes down here, the big boys, it seemed to be that everything went for them; the rub of the green, the decisions they got, the important decisions.

"The handball in the second half was not given. Would it have been given in the other box? Everybody could see it was a handball and he said it was ball to hand on the ground, but I've seen them given."

The result meant Ayr missed out on reaching a second Hampden semi-final of the season.

"It was a game I felt we could've won and we didn't," Reid told BBC Scotland.

"Being at home, we fancy our chances against anybody. We thought we could've got through to another semi-final and unfortunately on the day it never worked out that way.

"We've just got to pick ourselves up, we've got 10 very important league games. We've got to make sure we stay in the First Division and we've got concentrate on that now."

"We started off like a house on fire," said Fenlon. "You couldn't fault the players, they were magnificent from start to finish.

"We won't get carried away. It's a nice night for everybody involved with the club. We've got through to a semi-final, but there's still work to do.

"We're going to Hampden, so that's enjoyable. You take who you get in the cup.

"There's not a lot you can do about it. So, whoever comes out, we'll have a right go at them."