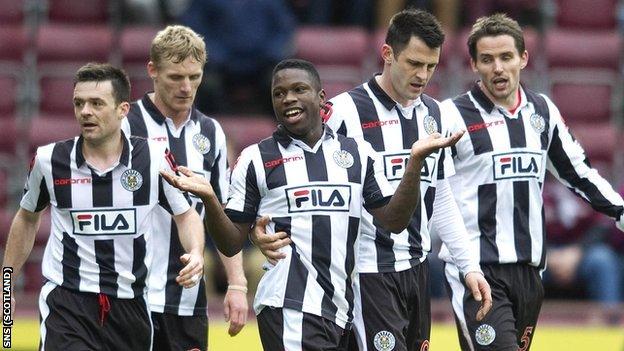 Manager Danny Lennon felt that his St Mirren players were worthy of their draw at Hearts in their exciting Scottish Cup quarter-final tie.

A Marius Zaliukas own-goal six minutes from time gave the Buddies a 2-2 result and sets up a replay in Paisley on 21 March for a semi-final spot.

"I must applaud the two sets of players for a cracking Cup tie," he said.

"Overall, looking at the balance of opportunities, it was probably a fair result."

Hearts are eight points ahead of Saints in the Scottish Premier League and, with home advantage, would have been favourites to progress.

However, Graham Carey's 20-yard free-kick midway through the first half put the visitors ahead before Craig Beattie nodded in from a corner in his home debut to level the score.

Sub Rudi Skacel completed the Hearts comeback three minutes after the break but Nigel Hasselbaink could not quite believe his good fortune when his shot was diverted beyond Hearts goalie Jamie MacDonald for a late equaliser.

"The first half performance from our lads was exceptional in terms of the opportunities created," Lennon told BBC Scotland.

"The only thing was, there wasn't more to show from that.

"Hearts scored from their first major set play, which was disappointing.

"In the second half we knew Hearts would have to adapt to try to stop us.

"They did that. They pushed the extra man forward, they tried to press us high and that worked for a while.

"We must keep believing in the stuff we produced in the first half."

Lennon thought his team might have snatched a winner in the final stages, but Paul McGowan, who will miss the replay after picking up a booking, was unable to convert when the opportunity presented itself.

"If there is anybody in your starting 11 that you want in that sort of position, it is wee Paul," said his manager.

"He is disappointed with himself but every single one of the players is a credit to St Mirren.

"I felt with the level of performance it was there for us, but on a positive note, to take them back to St Mirren Park in a replay, we are pleased.

"We had a magnificent reaction from our wonderful supporters who drove us on.

"From the first minute to the 90th, they got behind us. Even when we equalised at 2-2 I still felt we would have an opportunity to win the game."