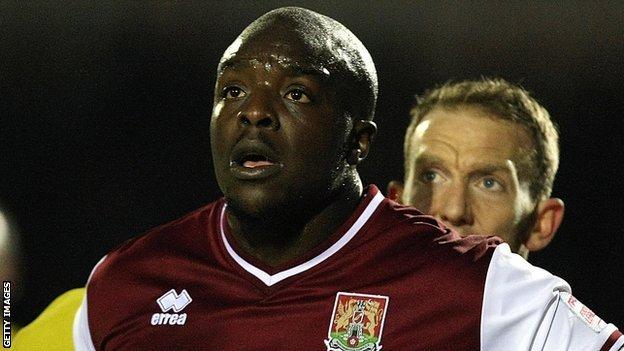 The 29-year-old has scored 16 goals this season, the joint second-highest in League Two, and has found the back of the net in the last five matches.

"He [had been] left out. Some players sulk and other players ask 'what do I have to do to get back in the team?'"

Akinfenwa scored twice in the 3-1 victory over Aldershot that took them out of the relegation zone, and is only one goal short of equalling his best ever tally for a season, from 2009-10.

"I know it's a hot [streak] at the moment, but I was scoring goals all season," said the former Gillingham, Swansea and Torquay striker.

"But it's the points on the board which is the main thing and it coincides [with the fact that] I'm scoring goals - long may both things happen.

"I'm not thinking about how many goals I can get, but as long as I can get minutes on the pitch, I'm sure I can get goals."

Cobblers midfielder Ben Harding said: "He's on fire. He's been absolutely fantastic for us since he's come back into the team.

"It's not just the goals, although they are important, [but] he works hard for the team."