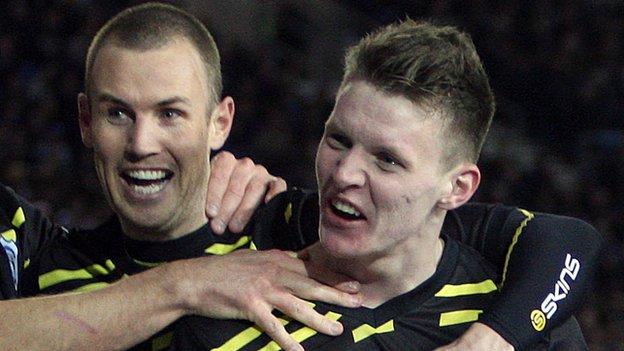 Joe Mason says he has sympathy for Rob Earnshaw as the striker continues to struggle for a place at Cardiff City.

Earnshaw has not featured in the Championship since October as Mason, Kenny Miller and Rudy Gestede have been the favoured attacking options.

"He's a top bloke and he helps me out in training every day," said Mason.

"I feel bad for him because he's a very good player. I look up to him. He's a top finisher and I can still go and ask him for advice any time I want."

Earnshaw failed to make the substitutes bench for Saturday's match at Bristol City, having also been omitted from the squad for the two previous Championship games.

The 30-year-old started the season as Miller's regular strike partner after rejoining the club on a free transfer in the summer, scoring three goals in his first six games, but the Wales striker has not started in the league since the 4-3 defeat at Peterborough in October.

"My squad was my squad and I picked who I wanted to pick," said manager Malky Mackay when asked about Earnshaw's continued absence.

"I wouldn't expect any player who's not in the 16 to be happy. It's a squad thing and it's about a group of players together. Some are called upon, some aren't called upon but you've got to make sure you're fit, ready and available.

"But it's not about an individual. To make a story or anything like that at the moment is ridiculous."

Mason justified his starting place against Bristol City as he played a crucial role in helping Cardiff win for the first time in four games.

Two attempted crosses resulted in goals, with the second arriving two minutes from time after the home side had twice gone close to grabbing a late winner of their own.

"Both of them were probably own goals but it's still nice to get the assists," said the 20-year-old, who scored his ninth goal in the midweek draw at Brighton.

"The main thing is we got three points. I did claim the goals - I'm a striker so naturally I am going to claim them but I think they were own goals."

Mason has now made 33 appearances in his debut season with Cardiff since a £250,000 summer move from Plymouth Argyle.

He admits to be surprised by how often he has played, but adding he has much to learn from experienced international such as Earnshaw and Miller.

"It's a big step up to what I was used to last season [in League One]," he said.

Mason's form, and his goal in the Carling Cup defeat to Liverpool in particular, has led Robbie Keane to suggest he is ready to break into the Republic of Ireland squad.

"That's not really something I've thought about," said Mason, and Under-21 Republic of Ireland international. "I'm more focused on doing well for Cardiff and what happens will happen I suppose."