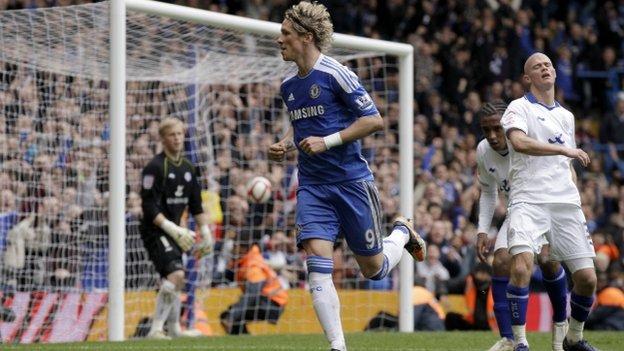 Fernando Torres ended a 24-game goal drought with two strikes as Chelsea eased past Leicester to book a place in the FA Cup semi-finals.

Gary Cahill headed the hosts in front and Salomon Kalou finished a breakaway for a second before Torres prodded in.

After Jermaine Beckford tapped in a rebound, Torres, who had not scored in 152 days, headed a fourth.

Leicester's Ben Marshall drove in from 25 yards but Raul Meireles finished a counter-attack to score the fifth.

Despite enjoying a prolific spell at Liverpool, Torres but had only scored one FA Cup goal before his double against Leicester

The Stamford Bridge club will face the winner of the abandoned quarter-final between Tottenham and Bolton in the last four.

Interim Chelsea boss Roberto di Matteo has stated that he will give Torres, who cost £50 million from Liverpool in January 2011, as long as it takes to rediscover his goal-scoring form.

The Spain international's work around the box suggested that confidence is not a problem but he wasted one first-half opportunity and passed rather than shot on two occasions.

But the weight was lifted when the striker found the net for only the sixth time since his move from Anfield, scrambling in from a Meireles cross. He then added Chelsea's fourth in a game that also saw him create two other goals.

Torres's breakthrough was another bonus for Chelsea as they won a fourth successive match for the first time since September, securing a trip to Wembley and a place in the semi-finals for the fifth time in seven years.

Beating lower-league opposition in an FA Cup quarter-final is hardly a notable achievement, given the success that has been enjoyed by the Blues over the last decade.

But it is the return of an authority and ruthlessness that contrasts so sharply with Andre Villas-Boas' time in charge at Stamford Bridge.

There may have been seven changes from the team that beat Napoli in the Champions League but Chelsea began with a similar intensity and Torres earned the corner that saw the hosts take the lead with only 11 minutes gone.

Juan Mata clipped the ball in from the right and Cahill rose above Wes Morgan to head in from six yards before unveiling a "Praying 4 Muamba" T-shirt in honour of his stricken former team-mate Fabrice Muamba.

They managed a second five minutes later when Torres tore clear down the right and showed intelligence to cross for Kalou, who calmly guided past visiting goalkeeper Kasper Schmeichel.

Torres got a clear opening of his own midway through the opening period when Mata cushioned a high ball and chipped into the area only for his fellow Spaniard to head straight at Schmeichel.

Midway through the second half, Malouda sent Meireles into space down the right and the Portuguese's cross was guided in by Torres.

After the impressive Neil Danns saw a shot come back off the post, Beckford touched in for his 15th FA Cup goal in 15 starts.

Torres restored the three-goal gap with a neat header only for Leicester substitute Marshall to thump in for his first since joining from Stoke.

But Chelsea scored a fifth when Torres raced down the left and cut back for Meireles to sweep in.