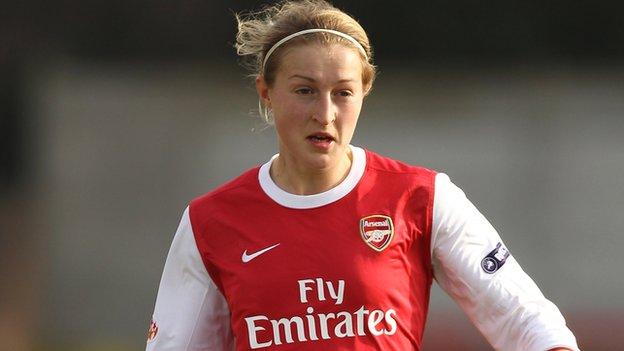 Sue Smith's Doncaster Belles debut ended in anguish as the England winger was stretchered off in the 2-1 win, after extra time, at Barnet.

White took advantage of an error by her England defensive colleague Casey Stoney, the Lincoln captain, to shoot Arsenal in front after 15 minutes.

The home side pressed for an equaliser for much of the remaining 75 minutes but were unable to break down a stubborn Gunners defence.

Striker Nicki Watts, who has rejoined Bristol from Reading, hit the 13th minute opener following a mix-up in the Leeds defence.

Gemma Rose doubled the lead four minutes before half-time with a low 25 yard drive that flew into the corner of the net.

Michelle Hinnigan gave Everton a fourth minute lead, following which Duggan struck in the 26th and 32nd minutes to give the visitors a clear half-time advantage.

Krystle Johnston reduced the arrears in the 70th minute, but 12 minutes later Duggan completed her hat-trick and an 87th minute Fara Williams penalty finished off City.

Jodie Taylor headed in a 20th minute cross by England left back Rachel Unitt, making her debut after signing from Everton, to put Blues on the road to victory.

A clever 30 yard lob by Izzy Christiansen edged the home side further in front after 62 minutes, and Maz Ballard hit the third goal seconds before full time.

Chelsea needed late goals to beat Brighton after the Southern Division team had held out partly due to the woodwork, which Blues struck three times.

The deadlock was broken when Dani Buet's 80th minute cross was headed in by fellow England international Dunia Susi.

Helen Bleazard tapped home the second goal from close range, and Sue Lappin wrapped up victory when she converted an Ashlee Hincks cross.

Premier League Barnet had a great start against their Super League opponents, Abby Prosser looping a 20 yard shot into the roof of the net after just two minutes.

But it took the Belles only six minutes to draw level as Smith struck home a 25 yard drive to make an immediate impression for her new club.

The 32-year-old left winger's debut was sadly cut short, however, when she fell awkwardly in the 28th minute and had to be stretchered off.

An extremely tight game followed, both sides having scoring chances before Leandra Little scrambled the ball home in the last minute of extra time to take Donny through.

A second half goal rush won the game for Blackburn after a goalless first half had given no indication of what was to come.

A Kelly McDougall penalty and a goal by Nat Gutteridge set the Black Cats up for victory, though the battling Southern Division side hit back through Naomi Clipston.

Mead hit her first goal just before half-time and added a second midway through the second half before substitute Jordan Atkinson completed the scoring.