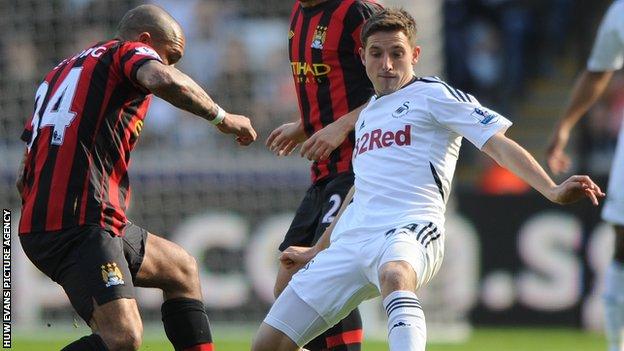 Midfielder Joe Allen believes Swansea City's 1-0 win over Manchester City is a sign of how far the club have developed this season.

Luke Moore's late header secured victory for Swansea to knock Manchester City off the top of the Premier League.

The Swans had lost 4-0 away to City in their opening game but Allen believes the side has come a long way since then.

"It's almost like looking at a different team now," said Allen.

"Maybe we've surprised Man City and we're just thrilled to have beaten a team that was occupying the top place in the table.

"I think every single person stepped up to the demands of the Premier League and we're moving in the right direction."

Allen said the victory over Roberto Mancini's side would rank among his career highlights and a memorable day in the club's history.

"I think it's possibly one of the biggest results the club has ever had," said the international. "[It was] an incredible day for the players and for the club.

"If you compare financially where the clubs stand, that's one of the reasons [the] result is so pleasing.

"Before the game our record was pretty decent against the top teams so we said there was no reason we can't go out there and perform.

"Not many people probably would have thought that meant three points but we worked extremely hard.

"It's a massive day for the club and for the history of the club I think."

The former Aston Villa and West Bromwich Albion player has been restricted to appearances from the bench this season but scored his third goal of the campaign.

"He's come on, especially in recent times, and done fantastically well for us," added Allen.

"He hasn't played probably as much as he would have hoped throughout the season.

"But he's a really important player for us and I think every single player in this dressing room will agree that he deserved that goal."

Goalscorer Moore believes the Swans are capable of finishing their debut Premier League season on a high with 10 games remaining.

"We're in a nice position because we can possibly kick on," said Moore.

"Each game is hard, we've got Fulham next week and they've got some great players. We just take each game as it comes and try and kick on.

"We can only play one way and we always stick to our principles and that's passing the ball.

"We've got a great team camaraderie so we all stick together. It's good for the group as a collective."