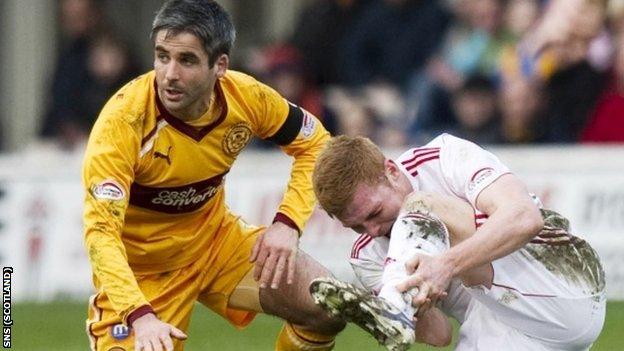 Aberdeen manager Craig Brown absolved Keith Lasley of blame after the Motherwell midfielder was sent off for a challenge on Fraser Fyvie.

Lasley was sent off for a slide tackle on the 18-year-old during Aberdeen's 2-1 Scottish Cup win at Fir Park and Fyvie was stretchered off.

"No way was that a deliberate attempt to injury a player."

Aberdeen impressed at Fir Park, racing into a two-goal lead thanks to a double by Rory Fallon.

It looked naughty, but I'm not complaining

Lasley's tackle led to Fyvie being stretchered off, but the Aberdeen boss refused to point the finger at the Motherwell midfielder.

"Young Fyvie has a very sore ankle. It looked naughty, but I'm not complaining; I never complain about decisions that go against us," he said.

"In actual fact, that decision went against us because it gave Motherwell the persecution complex: down to 10 men with nothing to lose.

"Lasley is the last man, in my book, to be a dirty player."

Brown felt his side struggled to make their numerical advantage pay dividends.

"We did not play well against 10 and I have to give credit to Motherwell because they were exceptionally positive with a man short," he said.

The 2-1 win at Motherwell set up a last-four clash with Hibernian on 14 April at Hampden.