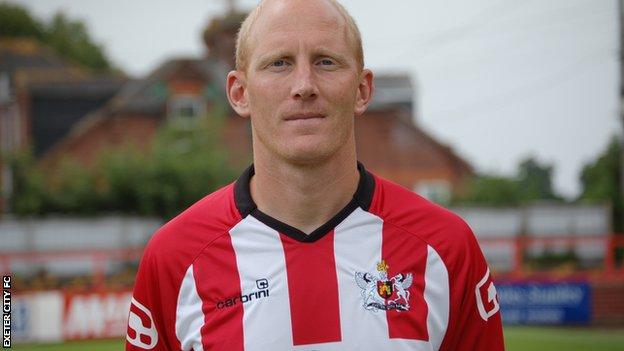 Exeter City assistant manager Rob Edwards believes his side can pull away from the relegation zone, despite their disappointing 3-0 loss at MK Dons.

Manager Paul Tisdale refused to talk to the press after the game as he locked his side in the changing room for over an hour after the loss.

The loss puts City three points from safety in the League One drop zone.

"We're struggling to get a win from anywhere, but it'll turn round," Edwards told BBC Radio Devon.

"We've got to fight from the front and the players have got to realise that if you feel sorry for yourself and you wait for what's going to happen on a Saturday then you'll find yourself 2-0 down.

You can dress it up as much as you want but we need to win games...

"We've got 10 games to go to get on the front foot and see what can happen.

"We back ourselves in that dressing room, the players believe they can do it.

"I think they've got to show a bit more belief," he added.

And Edwards says the players are under no illusions about what they need to do.

"They've got to be positive, we know the situation we're in, we need to go and win games.

"You can dress it up as much as you want but we need to win games and the players need to deal with the situation that we need to go out and win the game.

"We haven't come out of the dressing room where he's absolutely destroyed people's confidence.

"He's trying to build people for next Saturday already and we believe that the club can stay at this level and we've got a good group there," Edwards added.