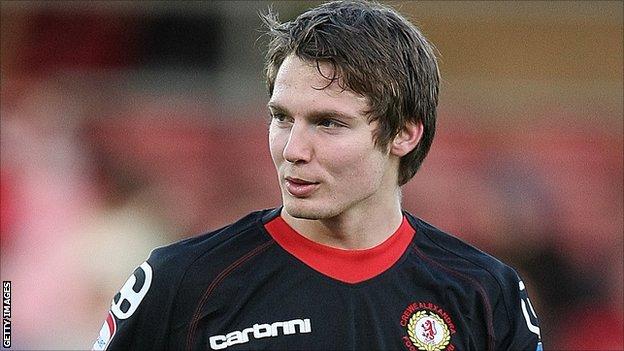 Nick Powell is a special talent who will go on to play at the top level, according to Crewe manager Steve Davis.

The 17-year-old capped an outstanding individual display with two stunning goals in a 4-3 win at Gillingham.

And he rounded off the weekend by collecting the League Two Apprentice of the Year prize at the Football League awards in London on Sunday.

"When he tries things and they come off, it's something special," Davis told BBC Radio Stoke.

"It's something you don't see at this level, it's deserved of a higher level, and he'll get there eventually.

"He's playing better every week and he's our top scorer [with 11 goals]. If he can continue with that form and keep scoring goals, he's going to be an exceptional player in the future."

Powell made his senior debut in August 2010 as a 16-year-old and has now made more than 50 first-team appearances for the Alex.

He was also one of three Crewe players to represent the England Under-18 side in their 3-0 victory against Poland at Gresty Road on Wednesday.

And Davis said the quality of his performance and his two goals against Gillingham proved that Powell will be star of the future.

"His first goal was exceptional," said the Crewe boss. "He just hit it out of nowhere, with no back lift, and it whistled into the corner. It was unstoppable really.

"The second goal showed a different side to his game and he was a menace throughout.

"Defensively, he came back and did his job there. He showed what he's capable of because he was excellent."

Another 17-year-old, striker Max Clayton, headed a stoppage-time winner at Priestfield to lift Crewe to within three points of a play-off place.