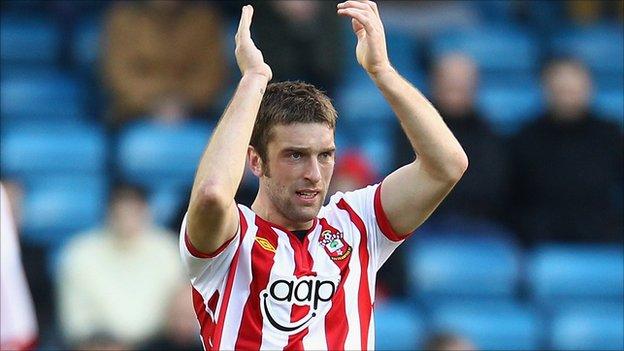 Southampton striker Rickie Lambert says his Football League Player of the Year award on Sunday was a huge surprise.

But Lambert admits he expected his Saints team mate - midfielder Adam Lallana - who was also among the nominees, to pip him to the award.

"It's a big honour and a huge surprise to be honest, I really thought Adam was going to get it," said Lambert.

The former Rochdale striker added: "Adam has been unbelievable this season and I thought he was going win. It was a surprise and a nice surprise.

"Adam gave me a big hug and told me I deserved it, which was nice. He is a great player and it is good for Southampton to have two players nominated. It's just disappointing we can't both have won it."

Lambert joined Saints from Bristol Rovers for £1m in August 2009 and has since scored 82 goals in 149 appearances for the Championship leaders, who are pushing for a return to the top flight for the first time since 2005.

The Saints are top of the Championship with 10 games to go following Lallana's two goals at the weekend against Barnsley.

And Lambert admits his award will count for nothing if the club do not go on to win promotion.

"It means quite a lot. Lots of people said I couldn't do it at this level and they are the kind of people who have driven me on," he added.

"I've always believed I can do well in this division. To finally do it and get the chance is very satisfying.

"The main thing though is to get promotion. That is the only thing that matters to me, Adam and the team, to get promotion would be huge for the club. That is what we will be aiming for, for the rest of the season."