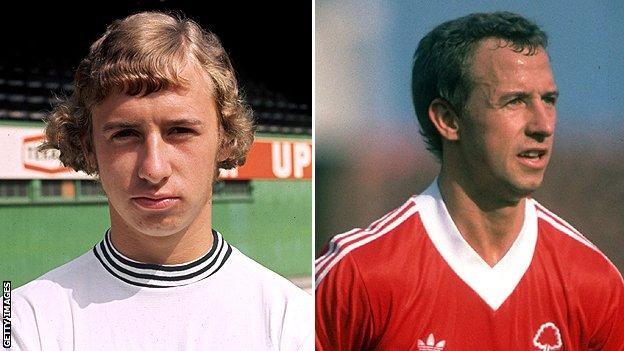 There are not many who have genuine affection for two fierce rivals but John McGovern is one of them.

The Scotsman won the Division One championship with Derby County in 1972, and later went on to lift two European Cups with Nottingham Forest, in 1979 and 1980.

The Rams and Reds will do battle at Pride Park on Tuesday with both sides hoping to salvage something from frustrating seasons.

After spending much of the first half of the campaign in and around the play-off places, Derby have only won one game in nine and have slumped to 15th in the Championship table.

Forest are in a relegation scrap but have won three out of their last five games taking them five points clear of the bottom three.

Ten players who have played for Forest and Derby

"Derby had a flying start, but reality kicked in," said McGovern.

"Nottingham Forest. who reached the play-offs last season. have been way below par on the field but it looks as though their loanees have helped change things around."

McGovern will be fulfilling his normal role of covering Nottingham Forest for BBC Radio Nottingham on the night but he has plenty of great memories from playing for both clubs.

"I had a fantastic time at Derby," he said.

"I served my apprenticeship there, if you like and after an unhappy time at Leeds United it was great going to Nottingham Forest.

"As a mature player at Forest it was more satisfying. It was an incredible time."

McGovern played 190 times for Derby County, between 1968 and 1974, before Brian Clough took him to Leeds United.

Clough lasted only 44 days at Elland Road and McGovern only made four appearances but the glory days were just around the corner.

Irrespective of which team he lined up for, McGovern loved playing in Forest and Derby games.

"There's a lot at stake," he said. "There will be a great atmosphere, you can forget everything else that has come before in the season, it's all about local pride."

His most memorable match came in a 4-2 win for Derby against Forest, at the City Ground, in 1970, when he scored with his left foot in the top corner.

"I enjoyed all of them. They were frantic, full blooded. They're much more controlled now but if you win the derby match, you're top dog."

How would Brian Clough prepare a player for a local derby?

"It would be a totally relaxed approach," said McGovern.

"We'd have very light training, have lunch and go to bed in the afternoon, because we rested there was no excuse for nothing but a full-blooded exchange."

And McGovern's affiliation to both teams means, that unlike the supporters, he can enjoy the match and occasion no matter who wins.