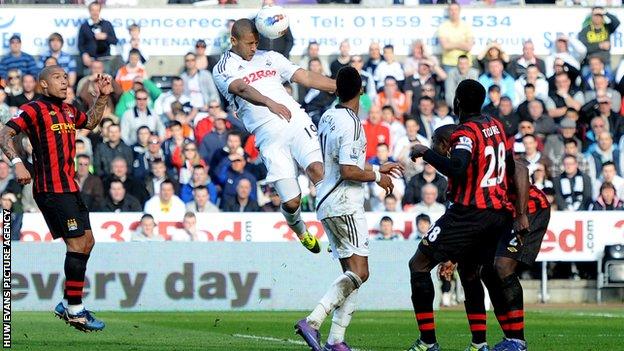 Brendan Rodgers believes Swansea City can help Luke Moore rediscover the kind of form that once made him one of Europe's brightest prospects.

Moore came off the bench to score Swansea's winner in the 1-0 victory over Manchester City on Sunday.

The 26-year-old striker joined Swansea from West Bromwich Albion in January 2011 but has found his first-team chances limited.

"He has the talent to be a real top player," said Rodgers.

"He is quick, strong and he is brilliant in the air so I think he has found a home. The environment is positive.

"He doesn't get criticised for making mistakes and we encourage [him] to play with confidence. If they make a mistake we urge them to go again.

"And his attitude has been good. At this level now it is not the starting 11 that is important, it is the finishing 11.

"He says he wished he had come here at 19 because he is wonderful talent.

"At his time he was one of the top talents in European football. He had a Premier League hat-trick at 19 years of age and for whatever reason his career drifted.

"He has gone up a level with the FA Cup goal [against Bolton] which was world class."

Moore, who moved from Aston Villa to West Brom for £3.5m in 2008, has previously spoken of his frustration at a lack of first-team football at Swansea this season.

The former Aston Villa player has only started two Premier League games this season with 10 appearances as a substitute as record Danny Graham monopolising the lone striker role favoured by Rodgers.

Moore's third goal of the season secured victory over Manchester City to knock Roberto Mancini's side off the top of the Premier League.

Mancini believes the Welsh side have done enough over the course of the season to secure Premier League survival.

But Rodgers does not want his side to ease up with 10 games of the season remaining.

"I'm not thinking about survival targets," added Rodgers. "I really want to sprint over the finish line. We want to keep improving.

"I want to finish as strongly as we can and that is why I have never set a target because once you hit that target people can become loose and free.

"We want to maximise our potential and that means pushing until the end."