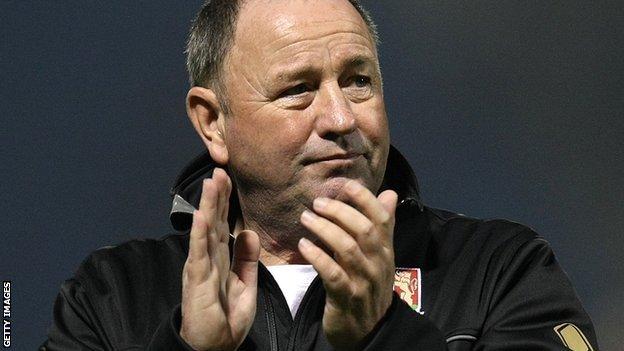 Yeovil Town manager Gary Johnson believes their recent form shows they are capable of competing with the promotion challengers in League One.

The Glovers' resurgence under Johnson continued on Saturday with a 2-1 win over Oldham - their fifth victory in six games.

They now sit 15th in the table, 14 points off the play-off places.

"We've proved we can compete and be in an automatic promotion position," he told BBC Somerset.

"We believe we can win enough football matches to be up the top.

"We're second in the [form] table so we aren't a mid-table side. It's not lucky, it's not flukey, it's something that we've done."

Johnson returned for his second spell as manager in January, replacing Terry Skiverton who moved to be his assistant, with the club sat 21st in the league.

The former Bristol City and Northampton boss has moved them clear of the relegation places but was quick to praise the efforts of his backroom staff for the Glovers' revival.

"It's a new regime. We're all enjoying it and working very hard in our little bunker that we've got under the stands," he added.

"Myself, Nathan [Jones], Darren [Way] and Terry. Everybody deserves credit and I want to win games for those three as much as I do for myself. I think that's the sort of spirit we've got here at the moment."