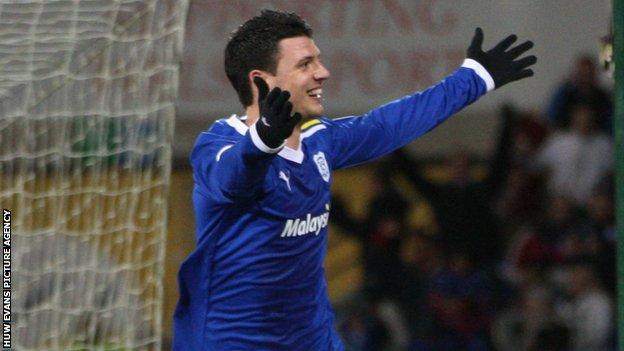 Cardiff City manager Malky Mackay has confirmed midfielder Haris Vuckic has returned to Newcastle after a one month loan spell.

Vuckic has scored one goal in five appearances for Cardiff since joining on loan in February.

But Mackay is hopeful the 19-year-old Slovenian will return to the Bluebirds on loan until the end of the season.

"He's going to be involved in their game against Arsenal and then it will be re-assessed," said Mackay.

"And I also know Alan [Pardew, Newcastle manager] wants it to happen as well.

"It will just be dependent on the health of his squad in the next few days."

Mackay has not ruled out bringing more players in on-loan into his squad with 11 games of the Championship season remaining.

"Most of the people being looked at will be Premiership players and it will be players that are maybe not going to be involved in the squad in the last six, seven weeks of the season.

"That's the decisions clubs have got to make and you're at their mercy.

"We just keep monitoring what goes on and if something arises quickly we will have done our homework on it anyway and we decide whether we're going to do something or not.

"If not then we keep our squad as fully fit as we can and they're a great group anyway."

The Cardiff manager has reported no fresh injury worries ahead of his side's Championship game at home to Hull City on Tuesday.

Mackay said his side's last two performances - the draw at Brighton and the victory at Bristol City - have been pleasing.

Victory at Ashton Gate saw a return to the play-off places for Cardiff, who have seven of their last 11 games of the season at home.

"The character we showed over the two games I was delighted with," said Mackay.

"We've got to try and be as consistent as we can in all 11 games now. Everyone's got something to play for.

"It's good that we've got more at home than we have away. But they're going to be tough games, make no mistake about that."