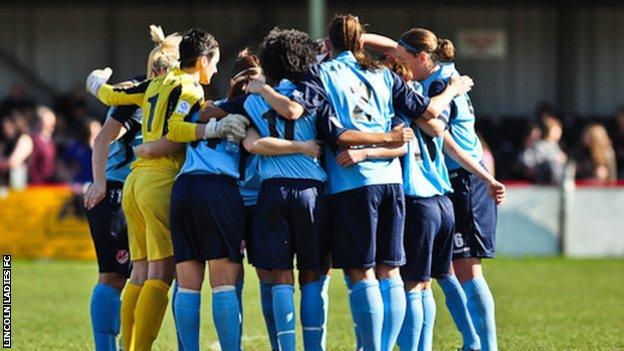 Manager Glen Harris was encouraged by Lincoln Ladies' performance despite losing 1-0 to Arsenal in the FA Cup.

Ellen White scored the only goal after 15 minutes after an error by fellow England international Casey Stoney.

Harris told BBC Lincolnshire: "Other than the goal, we've pushed them all the way and it showed some really positive aspects for the season.

"We've not pushed Arsenal that close before and I can't speak highly enough of the performance the girls put in."

He added: "The respect Arsenal gave us showed at the end, when they were playing into the corners and trying to run the clock down."

Harris refused to blame Stoney for the misplaced pass which led to the goal for last season's treble-winners.

"Casey's gutted," he said. "One of the key things we've been trying to get across is to take responsibility and Casey came off at half time and did just that.

"Football mistakes happen but credit to her, she didn't let it get her down, she got on with her game. Those things happen in football".

Lincoln's next match is at Chelsea in the Continental Cup on Sunday, 18 March.

Their opening game of the FA Women's Super League season sees them at home to Birmingham City on Sunday, 8 April.