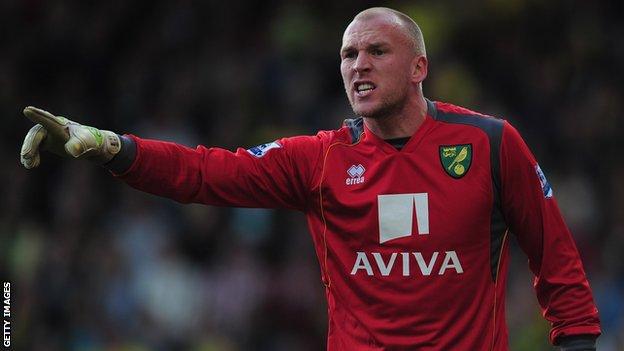 Norwich City goalkeeper John Ruddy has held up Wigan's seven-year spell in the Premier League as a "blueprint" for his own side to follow.

The relegation-threatened Latics secured a point with a 1-1 draw at Carrow Road on Sunday.

"They're the sort of blueprint you want to follow," 25-year-old Ruddy told BBC Radio Norfolk.

"They've been in the Premier League seven years now and that's the kind of run we want to go on."

He added: "With the quality we've got in the squad and the quality of manager and assistant manager I'm sure we can do that.

"I hope Wigan stay in the league because they've got some good players and a good manager."

The Canaries, who have all but secured safety in their first top-flight campaign for seven years, were pegged back for large parts of the game by the league' s bottom side.

They have now gone four games without a win in a run that has taken in an FA Cup defeat by Leicester and single-goal losses to Manchester United and Stoke.

"We were sluggish by our own high standards that we've set," added Ruddy.

"I think you could feel that around the ground. The fans were waiting for something to happen rather than egging us on.

"The fans' expectation level here is extremely high. We were disappointed not to win our last home game against Manchester United.

"But it's a very valuable point from a below par performance."

The former Everton keeper once again bolstered his claim for an England call-up by making a string of saves to deny Roberto Martinez's side.

"As long as I'm getting credit from the players, manager and fans that's all that matters," he said.

"England is out of my hands - if you excuse the pun - and I've got no control over that.

"'If people want to pick me for England then they do. But as far as I'm concerned my bread and butter is here at Norwich and that's all I'm concentrating on."