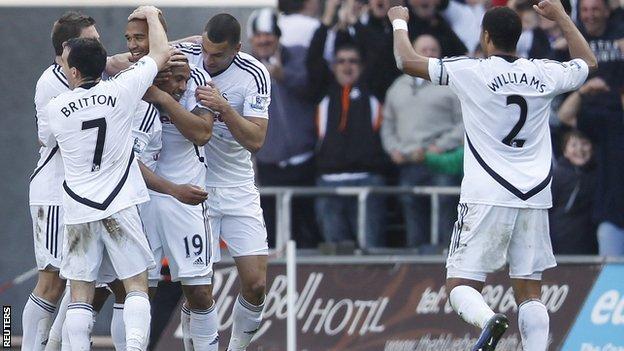 I rise with the roar made by the Swansea City fans around me at the Liberty Stadium, the same way I have stood up at thousands of times at hundreds of football matches before.

Only, this time, I haven't a clue why I am on my feet, at least for a few seconds anyway.

Why the confusion? Well, I'm wearing a blindfold. Why? I'm trying to follow a Premier League game, or at least part of it, the way hundreds of blind or partially sighted fans do at stadiums every weekend - without ever seeing a ball being kicked.

As I found out, it is an experience that does not feel in any way diminished - especially when you are in the middle of a partisan 20,000-strong crowd fired up for the visit of [then] top-of-the-table Manchester City.

I usually take it for granted that I can watch the action but, from the scent of cheap perfume and burgers to the buzz of anticipation and excitement from the crowd as they follow the ebb and flow of attack and defence, I can still smell, hear and essentially taste it.

I'm not on my own either. I'm with my cousin David, who is blind and has been since birth.

Swansea are his hometown club and he is a lifelong fan with an encyclopaedic knowledge going back to the early 60s and happy memories of childhood visits to the Vetch Field.

Like any supporter, he talks fondly of their time in the top flight under John Toshack and remembers the many seasons of struggle that followed before their recent revival.

But this is the first game he has been to for 48 years and also his first trip to the Liberty Stadium full-stop. He is shaking with excitement before kick-off, feeding off the growing frenzy of the crowd, and absorbing the sounds of the stadium.

And then my blindfold goes on and, like him, I am relying on my remaining senses - following the action through the reaction of the people around me, as well as through the local radio commentary in the special headsets we have been given.

It has a slight time delay but it eventually helps to fill in the gaps about exactly what did happen in those frenetic first few minutes that saw Swansea win a penalty, which was saved by Manchester City goalkeeper Joe Hart. We stayed on our feet throughout the cheers and groans and knew it was still 0-0 before the commentary confirmed it.

It was sometimes tricky to know exactly what was happening - the noise of the crowd made the commentary difficult to hear - but then the atmosphere is a big part of the experience of live football, even when you have to visualise the action.

We could not see him but we knew when City striker Mario Balotelli was on the ball - or falling over - from the jeers and whistles that followed him. "He's the rebel, isn't he?" laughed my cousin. "The enigmatic one!?"

It was not just isolated incidents that stood out.

I was looking forward to it, but it was even better than I imagined. I will never forget it

From the murmurs of appreciation and the fluctuating activity around me, I knew when Swansea had the ball, learned to follow the pattern of their patient brand of passing football and, from the frustration it brought the home fans, knew when the move broke down. Yes, you can hear good football, as well as see it.

My experiment ended at the start of the second half, meaning I witnessed the drama of the Welsh side's late winner, but the ground was rocking and I know I could have soaked up Swansea's celebrations just the same, even if I hadn't seen it.

Of course, removing a blindfold is not an option for blind or partially sighted fans.

And, although my Liberty Stadium experience was first class, there remains room for improvement in the facilities for blind fans there and around the country.

Currently, only seven of the 20 Premier League clubs provide blind fans with a dedicated descriptive commentary - provided by specialist commentators who describe what is happening, where the ball is, and what is happening off the ball, so they can react with the rest of the fans.

The rest are provided by local radio (four, including Swansea), hospital radio (three), club radio (five) and one club with no service at all. Chelsea are one of those without a dedicated service, and their digital radio feed provides description 30 seconds after it has happened in real time.

The RNIB's 'Soccer Sight' initiative attempted to install specialised commentators at every professional club by 2009 but that had not happened when funding for the scheme ended three years ago.

It seems a shame that the service is so inconsistent, because there is no reason in the modern era that live football should be inaccessible for blind fans, and there is so much about it for them to enjoy. You don't have to be able to see a match to feel like you are a part of it.

Going to big stadiums might seem daunting for blind and partially sighted people, but my cousin was already talking about his next visit as we weaved through the crowd outside afterwards. "The atmosphere was incredible," he said. "I was looking forward to it, but it was even better than I imagined. I will never forget it."

Thanks to Swansea City press officer Jonathan Wilsher and the stewards at the Liberty Stadium.