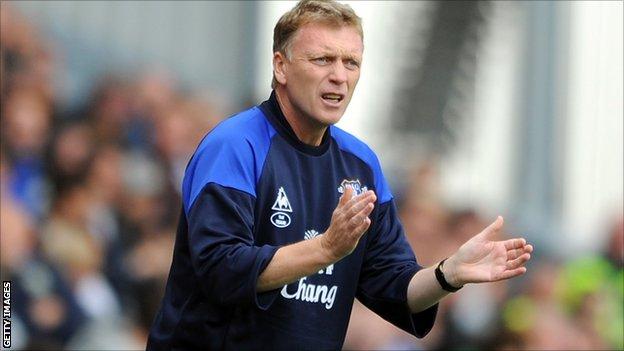 David Moyes celebrates his 10th anniversary at Everton on Wednesday - an achievement of real distinction and a reflection on the scale of his work in an era when some managers get months rather than years.

Many bosses have their success measured by the trophies they win. Moyes has not won a trophy in his time at Everton but has been an undoubted success and produced a superb piece of management at Goodison Park.

The victory against Tottenham on Saturday was typical of what he can produce. Everton were disciplined, hard-working, well-organised, meticulously prepared and won with a moment of quality from Nikica Jelavic. This is a team that is built in the image of its manager.

Moyes has been at Everton during what can only be described as a very difficult time for the club - working with a lack of funding, something that drives so much of the success in the modern game. 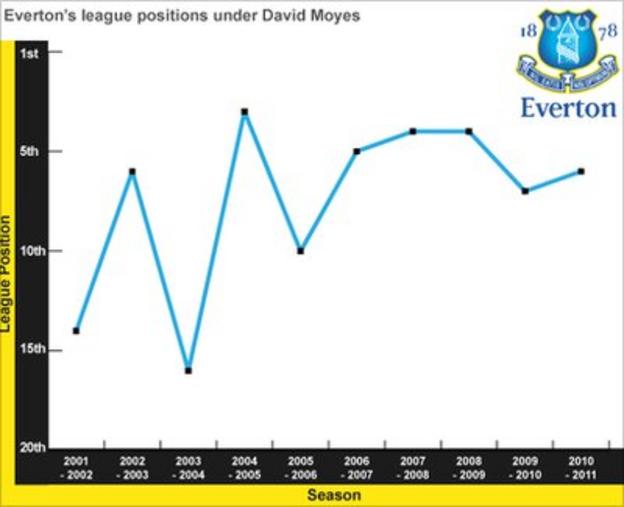 When Howard Kendall had his great Everton side and successes in the mid-1980s, money was still a factor for the top clubs but nowhere near the extent it is now.

Whereas so-called big clubs have got money coming out of their ears, Everton have struggled to raise finances and Moyes has been there all the time as the most significant and important figure at the football club.

This is a big time for Everton and their board. If they are going to keep Moyes they have got to show him that there is a real prospect of a way forward, not that there is no way he can take things further forward and break into the top six again.

And there may now be big jobs coming up that will have Moyes's name linked to them. Chelsea is available and of course there is all the talk of Spurs boss Harry Redknapp succeeding Fabio Capello as England coach.

Big clubs often gamble on foreign managers and one of the reasons is that there has perhaps not been an outstanding British candidate. There is one now in David Moyes. He is tried and tested, knows the Premier League, can deal with players and knows how to get the best out of them.

It would be no surprise to me if he was a target for these clubs and this is where Everton need to make sure he has hope for the future because he clearly has a great working relationship with chairman Bill Kenwright and complete control of football affairs - not something you sacrifice lightly.

David clearly has great loyalty to the club and has paid tribute to the way his chairman lets him do things his way, something any manager values

If Spurs fans, for example, were offered the choice of Moyes should Redknapp leave I believe they would say: "Yes - that's great". There would be no question of them not being keen on such a fine manager.

Kenwright has admitted in the last few days that his best chance of keeping Moyes at Everton is to finally find those big financial backers to satisfy his ambition. He realises Moyes is regarded so highly within football and at Everton.

Everton's fans will also recognise what he has done for the club. In recent weeks they have watched their team beat Manchester City, Chelsea and Spurs at a delighted Goodison Park without conceding a goal - all clubs and managers that have been operating in a different financial league to Moyes.

In these circumstances he has bought well, sold well and pretty much balanced the books while ensuring Everton have never fallen into the trap of over-extending themselves financially, even though he may have been sorely tempted to ask for the extra money required to push on a bit further.

It has been a marvellous achievement to stay at Everton for 10 years and in 20 years' time we may look back on this as a period when the club could have gone down the tubes but did not because of the quality of their manager.

Since the Premier League has started we have seen big clubs, clubs such as Leeds United and Nottingham Forest - who have won titles and contested and won European Cup finals - overstretch themselves and not just slip down one division but two. This has never happened to Everton on Moyes' watch.

Despite monetary restrictions Everton have never been in serious relegation trouble. 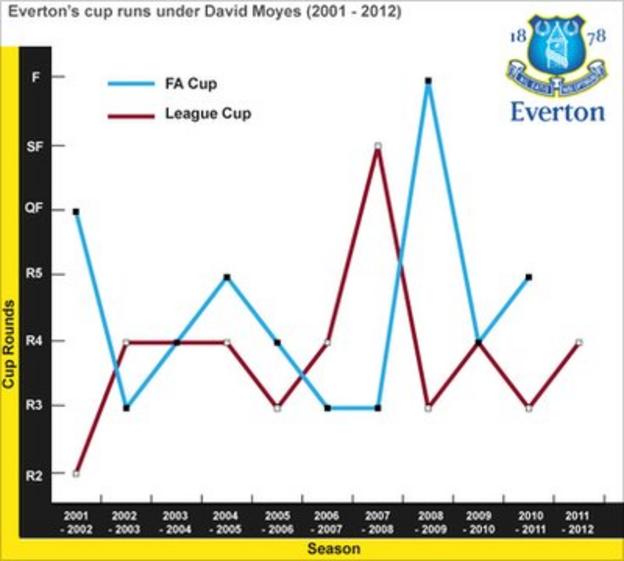 Moyes got them into the Champions League the season after selling Wayne Rooney to Manchester United - which was nothing short of miraculous - and has had fifth places as well.

Moyes faces Liverpool in the Merseyside derby at Anfield on Tuesday and I know the man in the opposition dug-out, Kenny Dalglish, rates Moyes as highly as everyone else in football. It will be fiery in the technical area but there will be that great mutual respect between the two Glaswegians who are so passionate about football and their football clubs.

Moyes has had to be clever in the market and choose carefully. Look at the return he has had on relatively cheap buys such as Tim Cahill, Phil Jagielka and Leighton Baines - as well as someone like Joleon Lescott, who he signed from Wolves for £5m and helped graduate to England level before he joined Manchester City for £24m.

He is excellent tactically, knows how to adapt to get results, knows how to get the best of out his players and knows the Premier League.

This is why it is so important Everton ensure they create the environment to keep Moyes. The good thing is he has spoken of this very close personal and professional relationship with Kenwright. David clearly has great loyalty to the club and has paid tribute to the way his chairman lets him do things his way, something any manager values.

Everton are once again in the Premier League's top 10 and have the opportunity to make another appearance at Wembley with a home FA Cup quarter-final against Sunderland on Saturday.

There could be big days coming up for Everton - and so much credit must go to their manager.