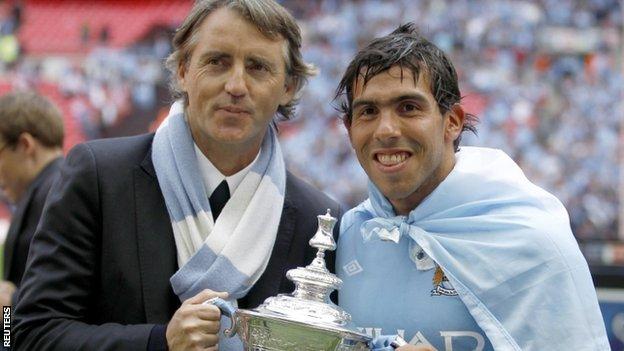 Manchester City defender Micah Richards says he would "love" to see Carlos Tevez return to the first team because he can win matches on his own.

City fell one point behind Manchester United in the title race on Sunday after a 1-0 defeat by Swansea.

"There were games last season where Carlos carried us on his own," said Richards. "In matches like the one at Swansea he would get a 1-0 win for us.

"Ultimately it's up to the manager but I'd love to see him back."

Richards added: "I've always been a big fan of Tevez - when I'm asked about him I always say I love him."

Tevez, who scored 44 goals in only 69 Premier League games during his first two seasons at City, has not played for the club since boss Roberto Mancini accused him of refusing to warm-up in a Champions League defeat by Bayern Munich in September.

He seemed certain to leave City during the January transfer window after returning to Argentina without the club's permission but the 28-year-old has since apologised to the club and supporters and has resumed training.

With 10 games of the season remaining, England right-back Richards knows City cannot afford too many more sub-standard performances if they are to end a 44-year wait for the title.

"We've got no excuses - we need to go back to the drawing board and see where we're going wrong because it's obviously not good enough," he added.

"It's disappointing to drop to second having held the lead for so long, but with 10 games to go it's not over and the derby at our place is going to be even more massive now.

"We have to concentrate on what we do.

"Chelsea is our next Premier League match at home [on 19 March], where we've been so strong, and it's a game we have to win now."