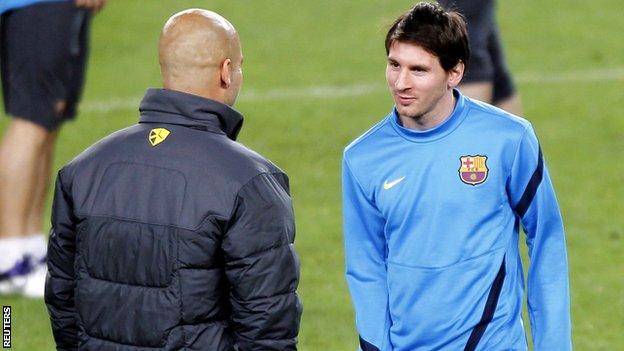 Barcelona have won 13 out of 16 possible trophies since Guardiola took over at the start the 2008-09 season.

Messi, a three-time world player of the year, has scored seven goals in the past week alone but insists: "Guardiola is fundamental to Barcelona's project."

The 24-year-old Argentine superstar continued: "His arrival [at the club] changed everything. Everything that has been achieved was achieved with him."

Messi followed his five-goal performance against Bayer Leverkusen in the Champions League on Wednesday with two more strikes in Sunday's 2-0 victory at Racing Santander.

He passed 50 goals for the second straight season with his brace on Sunday and also moved within five goals of matching the all-time club scoring record held by Cesar Rodriguez.

Guardiola's current deal at the Nou Camp expires at the end of this season and he has yet to sign a new contract, and Messi believes the club will struggle to replace him should he leave.

"Obviously the club and players will continue on but it would be very different without him,'' he said.

"It would be very difficult to find another coach who can achieve everything he has and who would make this team play the way he does. This is his team.''