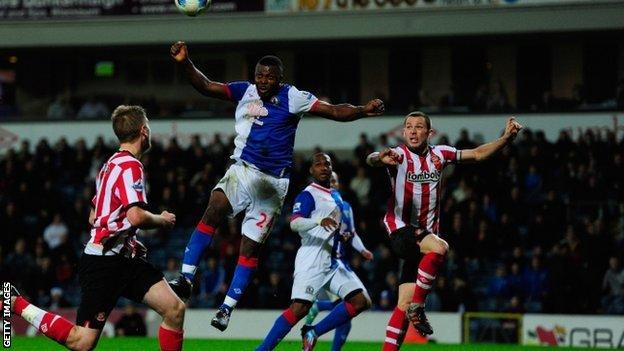 Yakubu's early effort was expertly cleared off the line by Phil Bardsley in a tame first half.

But following the interval, Mauro Formica's shot was saved before Hoilett volleyed in after a long throw.

The result earned Kean back-to-back wins for the first time since taking over in December 2010.

And Rovers took full advantage of a 10-day rest since beating Wolves, against a Sunderland team, who played in an FA Cup quarter-final at Everton on Saturday.

The hosts are also now unbeaten in three league games, a feat they have not completed this term and their form at a crucial stage of the season bodes well for the relegation battle ahead.

They will hope to take that run into Saturday's fixture against rivals Bolton, who sit five points and one place below them in the table.

But Kean has already spoken of his desire to follow Bolton's wishes, following the cardiac arrest suffered by midfielder Fabrice Muamba, and it is still unclear whether that game will go ahead.

Both sets of players were wearing T-shirts saying 'Pray for Muamba' before the game, with Yakubu revealing a similar shirt when he scored his 15th of the season.

And he proved once again that his goals and Hoilett's link-up play will be key to Rovers maintaining their Premier League status.

Having scored twice at Wolves, there were further signs that Hoilett has profited from moving into a more central position behind his Nigerian team-mate.

Yakubu was fed by the 21-year-old Canadian early on before his chance was acrobatically cleared off the line by Bardsley, Simon Mignolet then stopping Martin Olsson's effort as the Swede closed down on goal from a narrow angle.

The last time these two teams played in December, Sunderland manager Martin O'Neill began his reign with a last-minute victory over Kean's team, and this was only his team's fifth defeat in 20 games since.

Four of those losses have come after FA Cup games this season and, having drawn 1-1 at Everton on Saturday, they were again on the back foot after the break.

Formica tested Mignolet from the edge of the box, before Hoilett struck to lift the home supporters.

Morten Gamst Pedersen's long throw was nodded clear by Sotirios Kyrgiakos, on his Sunderland debut, but Hoilett smashed in on the volley for his sixth of the season.

Sunderland did respond thereafter and Olsson had to be at his most energetic to nip in and clear James McClean's cross, denying Nicklas Bendtner what would have been a certain goal.

Substitute Ji then made a hash of a great chance to equalise when he skied another McClean centre from four yards.

But, just as it looked like the visitors might pinch another late goal as they did last time, Yakubu headed in Bradley Orr's cross to give them some breathing space at the bottom of the table.

Sunderland boss Martin O'Neill: "For long periods we didn't play well enough and if we don't do that then you suffer the consequences. The FA Cup game was a contributing factor but it's not an excuse.

"The games come thick and fast for us and, of course, it was a very high intensity match on Saturday and we were feeling some effects from that, but it's not a good enough excuse. But in fairness, the team overall in the last few months, there wouldn't be too many times that you could criticise them."