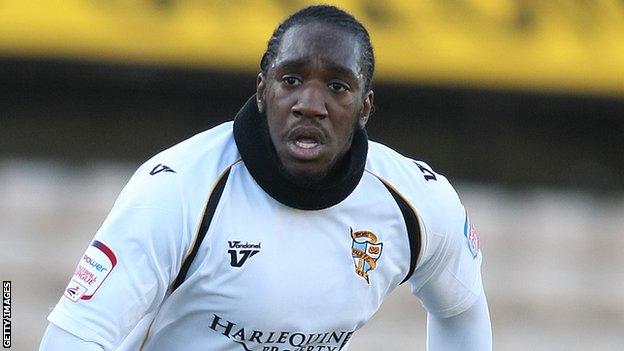 Mansfield extended their unbeaten run to eight with six goals in a pulsating local derby against Alfreton.

Jake Moult headed the opener for the hosts before Anthony Howell smashed Stags level, but Nathan Jarman powered home to put the Reds ahead again.

Headed goals from Martin Riley and Matt Green, and Howell's 20-yard rocket put the Stags 4-2 ahead but Anton Brown bundled in the home side's third.

After the break Exodus Geohaghon and Green secured the result late on.

Moult set the tone for a frantic match when he headed in Nathan Jarman's cross for the hosts before Howell, against his former club, rifled a shot into the roof of the net from close range after Lindon Meikle had his effort blocked.

Jarman then unleashed a powerful shot through Stags keeper Alan Marriott before Riley and Green's quick-fire headed goals, both assisted by Geohaghon, put the visitors ahead.

Howell then unleashed a 20-yard stunner into the top right corner three minutes before the break.

But two minutes into stoppage-time Jarman's low 25-yard free-kick saw Marriott parry into the path of Brown, who bundled the ball home.

In the second half both defences tightened up and the chances dried up but Geohaghon secured a much-deserved goal when he turned Luke O'Neil's corner in off his knee.

And Green outran the defence to lift the ball over Jon Stewart and seal a seventh win in eight league games for the Stags at the end.

"We showed signs of our early season frailty in the first half - we made a change at the break, we had to do that - but again, every time we went forward we looked like we'd score, and so did they.

"We've conceded some poor goals, some really poor goals. They've not earned them. The long throw was a continual torment for us.

"But give Mansfield credit; they've got a gameplan, and the play it - it's almost like a rugby game - but we didn't deal with it."

"It must have been great for the fans - after three or four minutes we've hit the post and it's come out and Louis Briscoe's put it wide. Straight from that they've gone up the other end and scored to make it 1-0.

"I mean first half, to be fair to Alfreton, they threw everything at us and credit to them. Every time they got into our box I thought they were going to score.

"But vice-versa, I thought every time we got into their box we were going to score. The pace was frenetic in the first half."