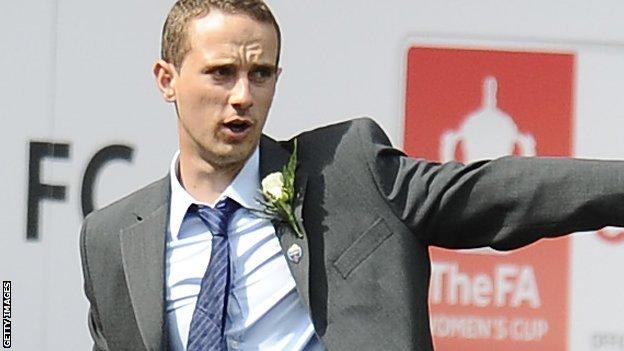 Bristol Academy coach Mark Sampson says having the FA Cup final staged at Ashton Gate is an added incentive for his players.

The Vixens lost in last year's final to Arsenal at Coventry's Ricoh Arena and Sampson's side have so far progressed to the quarter-finals this term.

This year's showpiece will be played at Bristol City's ground on 26 May.

"It's on our doorstep so we'll be doing our best to get there," Sampson told BBC Radio Bristol.

"Our determination, if it could be increased anymore after last season's defeat, certainly has been after the announcement it was at Ashton Gate.

"They were brilliant with us for the Champions League game and we'd love to go back and play there again."

Bristol beat Leeds 3-0 to reach the quarter-finals of the competition and will now face Blackburn, who sit two tiers below them.

"Blackburn have done really well to get this far," he added. "They're the lowest ranked team left in the competition and are in the equivalent of League One in the men's game.

"We are certainly favourites but aware that we need to play well against a good side."

As well as Cup success, Bristol will be looking to improve on their fifth-place finish in the Women's Super League last season.

Sampson has bolstered his team with the signing of Spain international striker Laura Del Rio and after scoring on her debut against Leeds, the Vixens coach believes her arrival will have a big impact.

"We've worked really hard to address some things we needed to improve last season," said Sampson. "We defended very well and created opportunities but maybe didn't have that quality in the final third.

"Laura's been a good addition to us. She's got a great international record and a background of playing in some of the top leagues in America and Europe.

"She's one of the first ones to come in as full professional footballer. It shows people that we're really serious about women's football and can attract big names to the south west."