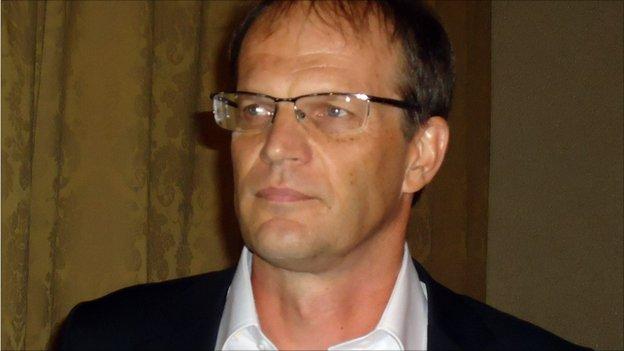 Cameroon coach Denis Lavagne says he is confident of holding onto his job despite the launch of a government inquiry into his appointment.

"I am not afraid of losing my job," Lavagne told BBC Sport.

"If there's anything about me losing my job, you should ask the federation, sports ministry or the government."

Last week, the office of the Prime Minister wrote to Adoum Garoua, the Minister of Sports and Physical Education, seeking clarification on the dismissal of Spaniard Clemente.

"I write to you on the directives of the Prime Minister who wishes to know the circumstances that led to the termination of Javier Clemente and his assistant's contract and the recruitment of the present technician," the letter stated.

Clemente was sacked on 25 October, with six months left on his contract, after his failure to qualify the four-time continental champions for the 2012 Africa Cup of Nations.

However, the government is keen to know more about the reasons for dismissing the Spaniard, with some Cameroon fans believing he was doing a good job.

Lavagne took over four days later, supposedly with a two-year brief, but he is still without a contract - even if he refuses to be drawn on this issue.

"I am in the field, I do my work and the contract is something that only the sports ministry and the federation should answer," added the Frenchman.

For its part, the sports ministry says it wrote to Prime Minister Yang on 15 December, asking him to sign Lavagne's contract.

This followed a request from Football Federation president Iya Mohammed urging the Sports Minister to sign the same paperwork.

Last month, former Coton Sport coach Lavagne led his side to a first competitive victory as they won 1-0 in Guinea Bissau in a 2013 Nations Cup qualifier.

The Frenchman has been tasked with reviving the fortunes of a side who have slipped to their lowest Fifa ranking ever, with the Indomitable Lions currently lying in 66th place.

Nonetheless, his appointment is being heavily scrutinised by the Prime Minister's office, who have sent two letters to the ministry - dated 6 February and 5 March - without response.

"I have the honour of reminding you of the assiduousness of this information for the government and the Head of State," the latter letter added.

The sports ministry says it has forwarded the correspondence to the Cameroon Football Federation.