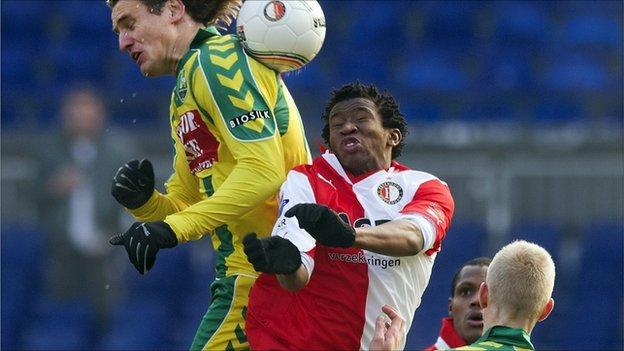 South African midfielder Kamohelo Mokotjo is hoping he can help Feyenoord qualify for the Champions League for the first time in almost a decade.

"I've been used everywhere, central defence, right back and midfield, and it's been a good experience," he says.

"It was a challenge but I suppose I've passed all the tests by being awarded a new contract."

The former SuperSport United player has been used mainly as a substitute in a variety of positions by coach Ronald Koeman as Feyenoord have lost only twice in their last 12 Eredivisie matches.

That has left the 1970 European Cup winners in sixth spot in the standings and seven points behind leaders AZ Alkmaar as they chase their first league title since 1999 with seven rounds left.

But despite being a young squad spearheaded by Manchester City loan striker John Guidetti, Mokotjo believes they can secure at least a top two finish and return to Europe's elite club competition.

"It's not impossible and that would be a great opportunity for all of us," he told BBC Sport.

"It has been a very long time for the club since we made it to Europe and it would be a great reward for the season we have had so far.

"John has been very influential for us but we're all young players - 80 percent of the squad is under 23 and together we make a good team.

"If we play individually it doesn't work, but the fact we're all so young means we help each other out."

Mokotjo and fellow South African Kermit Erasmus arrived in Holland in 2009 after being spotted by scouts playing for SuperSport's academy.

They were both loaned out to second division side Excelsior in their first season and helped the club clinch promotion.

But while Erasmus has since returned to SuperSport, Mokotjo remained and has established himself as a utility player who can fill several different positions at a club recently plagued by financial difficulties.

"It is tough in Holland but I think that was Kermit's personal choice to go back," he explained. "I spend most of my time here and everything is good. I love the city and where I live so I'm enjoying the life here.

"I do miss home sometimes but I don't cry about it or anything like that. I'm used to it now and I call home when I need to."

After representing his country at several youth levels including the 2009 Under-20 World Cup, Mokotjo is still waiting for his first senior call-up.

However, coach Pitso Mosimane has been in regular contact and it seems there is every chance he could still play a part in next year's African Nations Cup on home soil.

"I know he is watching me because I've spoken to him before and he tells me he is following my progress," he said.

"The coach is building a new team and I want to be in that team. It's up to me to keep going now and impress him."