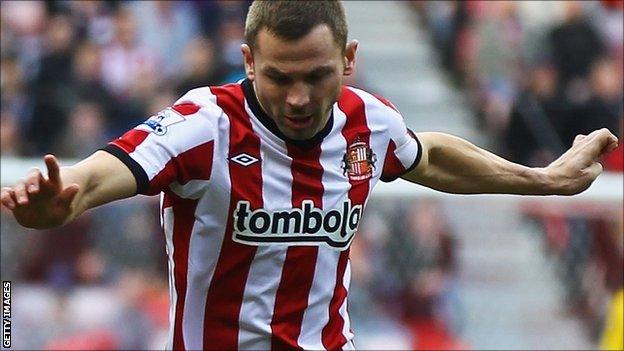 Sunderland defender Phil Bardsley has said the club's disappointing record at Everton will have no bearing on Saturday's FA Cup quarter-final tie.

The Wearsiders have won just two league games in 30 years at Goodison Park, with four defeats in the last five visits to the Toffees' home.

"The mentality we've shown in recent weeks is one where we won't get beaten," Bardsley told BBC Newcastle.

"We'll go and get a result even if it means bringing them back to our place."

Bardsley added: "First and foremost we want to go and win the game."

Martin O'Neill's Black Cats go into the tie on the back of a win against Everton's Merseyside rivals Liverpool at the Stadium of Light; the 11th success in 18 matches under the Northern Irishman's management.

However that record will be tested at a ground on which Manchester City, Chelsea and Tottenham have been beaten in recent weeks.

"People don't realise sometimes how difficult it is to go to those type of places. Goodison is like that, top teams go there and are beaten," Bardsley said.

"But we'll go there with bags of confidence and believing in each others ability that we can go and get something.

"The form we've been showing, I don't see why not."

Since being FA Cup semi-finalists in 2004, Sunderland have not progressed beyond the fourth round and were knocked out by League One side Notts County at the third round stage last term.

"A few players might say it's a rest that we need for the run-in, but I think the best philosophy is to keep playing football matches, to keep winning and to keep in the right frame of mind and on the ball.

"If we show that same work ethic, we've got a great chance of going to Goodison and getting a result."

Sunderland have knocked out Peterborough, Middlesbrough and Arsenal on route to the last eight this season.