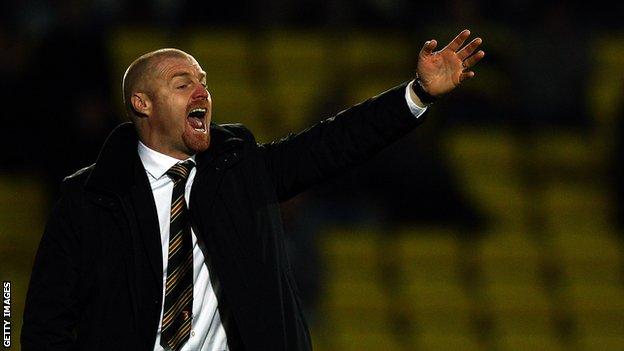 Watford boss Sean Dyche has praised his side for the "phenomenal" progress they have made this season.

The Hornets, who were as low as 22nd in the Championship at the end of October, have won five of their last nine games to ease fears of a relegation battle.

"There were many questions asked in the summer, which is natural," Dyche told BBC Three Counties Radio.

"I can't tell you how proud I am of what the club have done to turn things around this season."

The departures of boss Malky Mackay and star players Danny Graham and Will Buckley in the summer raised questions over Watford's ability to replicate last season's mid-table finish.

And despite failing to find a win in their first five league games this term, the Hornets have recovered to reach 14th spot, the same position they finished last year.

"The way the club, staff and respect of the supporters has developed has been absolutely phenomenal," added Dyche.

"We're a developing side. We can't always play consistently with the ball for 90 minutes and use it as wisely as we'd like.

"But I think there are massive strides we've made this season.

"We've got 10 games left. We want to finish strong and give it everything we can. I've spoken all season about looking forwards.

"A catchphrase of mine is 'look towards winning instead of looking to not lose'. It's a different mindset completely."