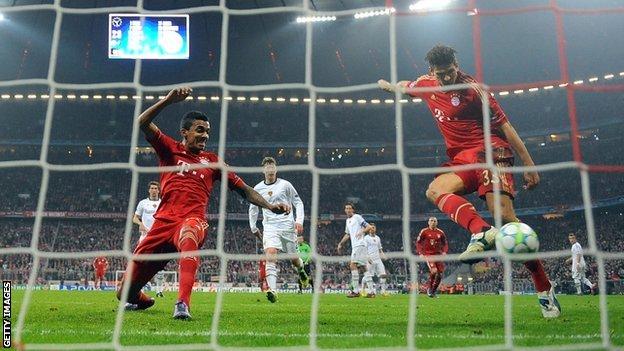 Mario Gomez scored four goals as Bayern Munich demolished Basel to record the biggest ever win in the knockout stages of the Champions League.

Arjen Robben's crisp finish levelled the tie on aggregate before Thomas Mueller volleyed in at the near post.

Gomez tapped in a third, volleyed a fourth and headed a fifth to complete his fifth hat-trick of the season.

The Germany striker rifled in his fourth before Robben's low finish completed a historic victory.

Who is Mario Gomez?

While it was a humiliation for the Swiss champions, it was an awesome display of attacking from the hosts just a week after Barcelona hit seven against Bayer Leverkusen at the Nou Camp.

After such a devastating display, Bayern will join Barca as hot favourites to reach the final at the Allianz Arena on 19 May - and Robben is not scared of drawing the big guns.

"To score seven goals in the Champions League speaks for itself," said the former Chelsea and Real Madrid winger.

"Fourteen goals in our last two games after our defeat at Leverkusen speaks volumes for the way we have played.

"We have to stay focused. It would be good to get Barcelona or Real Madrid in the next round, but we'll take whoever comes."

Bayern coach Jupp Heynckes described his team's performance as "perfect" and was delighted at his side's ruthlessness.

"The second and third goals came at a very important moment, psychologically. Altogether, it was the perfect game from us."

The Bundesliga side played with a swagger and tempo that Basel could not live with, outclassing Heiko Vogel's side from the first minute.

After an early onslaught on the Basel goal, the German side broke the deadlock 11 minutes in when Mueller's low drive was deflected into the path of Robben, who fired a low shot under Yann Sommer.

Basel, whose impressive first-leg display saw them take a 1-0 to Bavaria, tried to keep Bayern at bay but the home side extended their lead through Mueller, whose diagonal run to the near post was not picked up as he caressed Robben's cross beyond the visiting goalkeeper.

A bad first half for the Swiss side became catastrophic moments later when Toni Kroos picked out Holger Badstuber at the far post, and his ball across the face of goal was tapped in by Gomez.

The in-form striker then bagged his second and Bayern's fourth early in the second half with an improvised finish from Ribery's cross.

Ribery was just as devastating on the wing as Gomez was in attack, and the Frenchman's weaving runs and accurate deliveries caused more problems when his cross found Gomez, who powered in an emphatic header.

Bayern led 5-0 at this stage but showed no signs of taking pity on the side that ended Manchester United's Champions League hopes as the lethal Gomez grabbed his fourth midway through the second half - lashing in to the top corner after more good work by Ribery.

By this stage the records were tumbling, with Gomez becoming the first German player to score four in a Champions League match - only the eighth man to achieve the feat.

Robben capped an imperious display by the Bundesliga side, cutting in from the right to fire a low shot under Sommer and leave Bayern in confident mood ahead of the quarter-final draw on Friday.