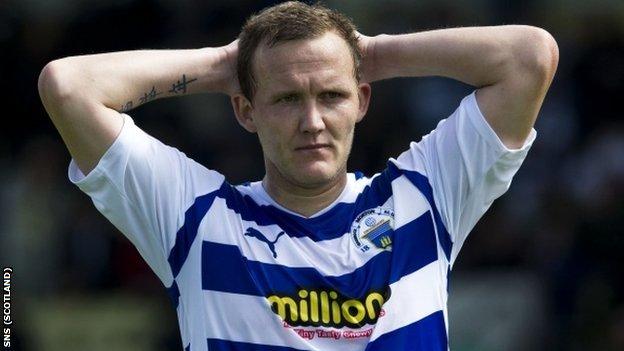 Two goals in the final three minutes edged Morton another point clear of the relegation zone as they held runaway leaders Ross County in Dingwall.

Michael Gardyne had fired home after 32 minutes and Richard Brittain extended the lead with a 58th-minute free-kick.

But the draw means County's lead over Falkirk is only extended to 12 points.

Third-placed Dundee were denied the chance to draw level with the Bairns after their home match with relegation-threatened Ayr United was postponed shortly before kick-off after a floodlight failure.

Ayr's inactivity means that they now lie two points behind Morton in eighth place but with a game in hand.

The Greenock side failed to convert the first chance of the match at Victoria Park, Andrew Jackson's effort failing to beat Michael Fraser, with the goalkeeper making a routine save.

County took the lead just after the half-hour mark when Gardyne was on hand to fire home Iain Vigurs' cross.

Gardyne could have added a second minutes later, but his shot was well blocked by Michael Tidser.

The hosts doubled the advantage just before the hour mark, Brittain's free-kick leaving Alan Combe with no chance.

Campbell began the fightback three minutes from time, firing home from the edge of the box.

An unlikely comeback was complete deep into stoppage time when Weatherson netted from the spot after Scott Boyd handled inside the area.