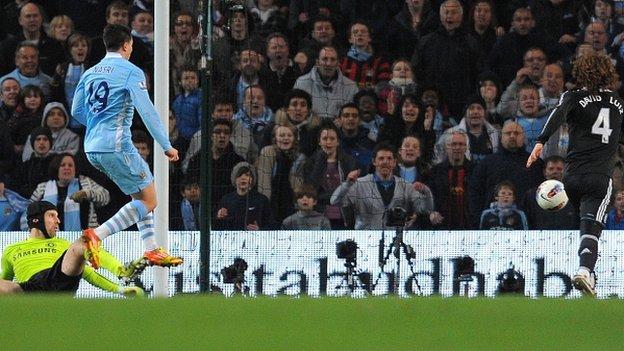 Carlos Tevez came out of exile to create Samir Nasri's late winner as Manchester City ensured they closed back in on leaders Manchester United at the top of the Premier League.

Roberto Mancini's side were facing the prospect of United maintaining a four-point gap at the top of the table after Gary Cahill's deflected shot put Chelsea ahead on the hour.

It was the signal for Mancini to bring outcast Tevez back into the fold for the first time since September, when it was claimed he refused to come on as a substitute during the Champions League defeat against Bayern Munich in Germany.

He came from the bench to remind City what they had been missing - and what he had missed in his absence - as City turned the game around to secure a vital victory to reduce the gap to a single point and ensure their destiny remains in their own hands, with United still to visit The Etihad in April.

Sergio Aguero put City level from the spot after 78 minutes after Michael Essien handled Pablo Zabaleta's shot to set up a grandstand finish and Tevez helped the outstanding Nasri to oblige with five minutes left. The Argentine's short pass opened up space for Nasri to lift a clever finish over Chelsea keeper Petr Cech.

The victory was City's 20th successive league win at home - the first club to achieve this feat since the inception of the Premier League 20 years ago and only the fourth in top flight history, joining Liverpool, Newcastle United and Preston North End.

City were placed at a serious pressure point when Chelsea took the lead - but responded with real character to show the self-belief that they can win their first title since 1967/68.

And with the talented Tevez rehabilitated, at least for now, Mancini has another big weapon back in his attacking armoury for the closing weeks of the season.

In a first half that rarely touched the heights of quality, City exerted most of the pressure and created the more acceptable chances without getting any reward.

Zabaleta set up an early chance which David Silva drove over, while Nasri was desperately unlucky not to put City ahead in the eighth minute. He lifted a delicate finish over a flat-footed Cech, only to see it bounce back off the crossbar.

Chelsea were forced into an early reshuffle when Jose Bosingwa replaced Branislav Ivanovic, who had sustained a thigh muscle injury. And it was City who continued to dominate, with the out-of-sorts Mario Balotelli wasting a chance to ease the growing anxiety around The Etihad.

Just as Tevez warmed up to a smattering of applause, which he acknowledged, Frank Lampard conceded possession and the Italian raced clear only to see Cech get the merest of touches to divert an admittedly tame finish wide.

It was the Italian's last significant contribution of a listless evening and he was replaced by Gareth Barry during the half-time interval.

Nasri was once again frustrated by the woodwork after 54 minutes when Cech turned his cross on to the bar. Silva then turned the ball inches wide, so close in fact that many City fans celebrated a goal.

It was against the run of play that Chelsea took the lead on the hour. Cahill's shot took a deflection off Yaya Toure that completely wrong-footed Joe Hart, although City complained with some justification that David Luiz had nudged Barry in the build-up.

This was the signal for Mancini to order Tevez to prepare for his entrance, which he duly made at the expense of Nigel de Jong. The reception was mixed but the object of the exercise clear - to navigate a route back into the game.

Chelsea made a change of their own, sending on Didier Drogba for Fernando Torres, and Juan Mata broke the shackles to force Hart into a save at his near post.

City were level with 12 minutes left when substitute Essien, on for Raul Meireles, handled Zabaleta's powerful shot. Aguero stepped forward and made no mistake to set up the frantic finale that brought Nasri's winner and scenes of undiluted jubilation around The Etihad.