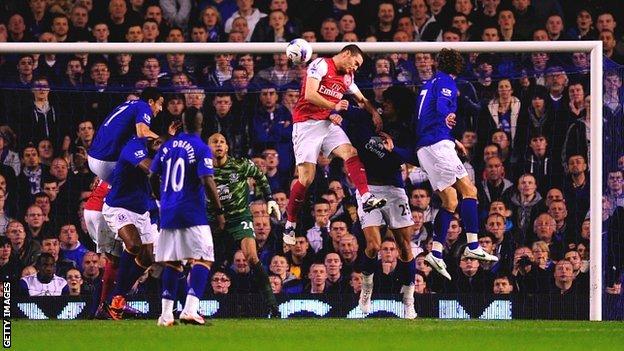 Arsenal moved up to third in the table after claiming their sixth successive Premier League win courtesy of a battling display at Everton.

Thomas Vermaelen headed the only goal of the game from a corner during a period of early Arsenal dominance.

But Everton rallied and were denied an equaliser when Royston Drenthe's finish was wrongly ruled out for offside.

The Toffees had further chances to get something from the game but the Gunners showed great resilience to hold on.

What is clear from this is that early February reports of Arsenal's demise were greatly exaggerated.

Following a 0-0 draw at Bolton seven weeks ago, the Gunners were seventh, 12 points behind third-placed, north London rivals Tottenham, bringing the doom-mongers out in force.

However, their last six games have seen them take 18 points, score 19 goals, rediscover the confident swagger for which they are synonymous under Arsene Wenger and demonstrate a resilience many thought they lacked.

At Goodison Park, the opening 15 minutes were a testimony to the north London side's attacking prowess as the reborn Tomas Rosicky, the supremely prolific Robin van Persie and the recalled Aaron Ramsey all threatened to put the game beyond the home side.

This period should have yielded greater reward than Vermaelen's solitary headed goal from a Van Persie corner.

Everton are a potent force on their own turf, though, as Champions League-chasing trio Manchester City, Chelsea and Tottenham have all discovered recently, and they stemmed the tide before turning it in their favour for much of the remainder of the game.

That the Toffees got nothing from the match is because of a combination of three factors - their own inefficiency in front of goal, Arsenal's newfound defensive solidity and an erroneous assistant's flag.

The latter came shortly after Vermaelen's goal as Drenthe's finish from inside the box was ruled out for offside, only for replays to show he was two yards behind the last defender at the time of Tim Cahill's pass.

This could have been the platform the home side needed to go and potentially win the game but, instead, they were unable to convert long periods of possession into enough clear-cut chances to hurt the visitors.

Their best chances fell to Marouane Fellaini, who headed across goal and wide, and Drenthe, who fired over from the edge of the area.

Earlier in the season, Arsenal would not have won this game, but a settled back five has given them a new robustness.

It was this that ultimately earned them a three points that sees them move above rivals Spurs - who drew 1-1 at home to Stoke on Wednesday - for the first time since September.