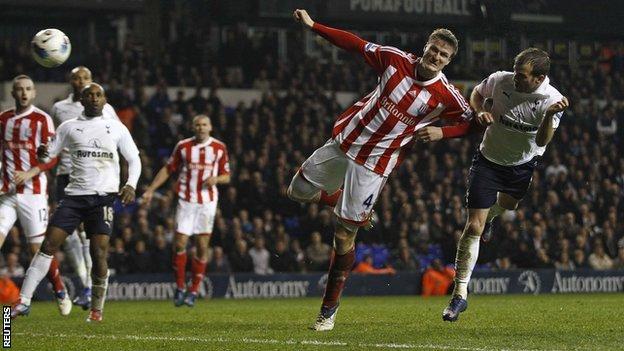 The Potters had previously defended well, going ahead against the run of play when Cameron Jerome poked home from close range.

And, despite their late equaliser, Spurs slipped behind north London rivals Arsenal to fourth in the table.

It was a bitter-sweet night for Tottenham, Van der Vaart's late goal masking the frustrations of a disappointing performance and the news that Arsenal had won at Everton.

On 1 February, Spurs' advantage over the Gunners stood at 12 points, but they now trail their neighbours by one.

Spurs boss Harry Redknapp said he would check on the mental state of his players after Bolton midfielder Fabrice Muamba suffered a cardiac arrest at White Hart Lane on Saturday.

Whether or not they were affected by the events concerning Muamba, the home side made a sluggish start but looked the much more likely side to win the game from midway through the first half.

However, for all their possession, they struggled to break down an organised Stoke defence, Potters goalkeeper Asmir Begovic rarely being forced into action.

Still, it was a surprise when the Stoke goal came, as Spurs were enjoying their best spell of the match, Bale's long-range effort looping over Begovic but not dipping under the crossbar.

Almost instantly, Stoke won a free-kick midway into the hosts' half that was whipped in by the recalled Jermaine Pennant and met by Robert Huth.

Jerome, who came closest for Stoke in the first half by twice testing Brad Friedel from distance, reacted quickest, prodding the ball home and giving Stoke hope of their first-ever league double over Tottenham.

Even the shock of going behind was unable to awaken Spurs, who now looked likely to rue the chance Modric wasted in the first half.

On a rare moment of slack defending from the Potters, Modric was fed by a slide-rule pass by Bale, but could only shoot across Begovic and wide.

Aside from that, the Stoke keeper was only called into action twice in the opening period, first dropping onto Van der Vaart's low effort, then tipping Louis Saha's shot from the edge of the box over the bar.

With those chances gone, and Bale's brilliant effort unrewarded, Spurs looked set for a fourth defeat until the Welshman's fizzing cross late in stoppage time.

Van der Vaart's header flew past Begovic but, by then, Spurs' grip on third spot, and the mantle of top London side in the top flight, was already slipping.