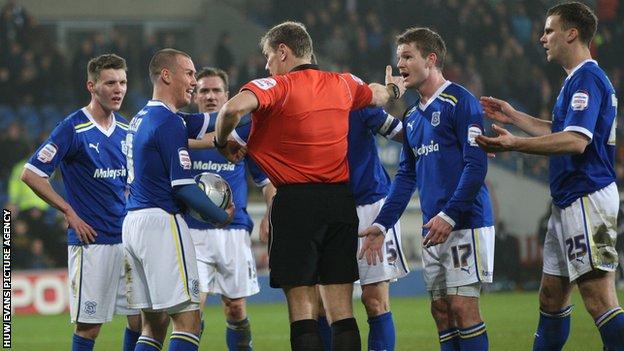 Bluebirds manager Malky Mackay was furious with the officials for a "horrendous decision" to disallow a potential Cardiff equaliser.

Mackay also claimed Hull's third goal was offside but Hudson said the blame for the defeat lay with the players.

"We've given away three poor goals that has gifted them the game," Hudson said.

"They are a difficult side to break down. We knew that and we'd been working on that. To give them the goals the way we did wasn't good enough really."

Kevin McNaughton gave Hull a sixth-minute lead with an own goal when he made a complete mess of trying to clear the ball from a corner.

The full-back was on his knees as he attempted to head clear from inside his own six-yard box.

Cardiff thought they had equalised when Ben Turner headed in from a Peter Whittingham corner on 40 minutes but the assistant referee flagged for an infringement on Hull goalkeeper Vito Mannone.

Mackay expressed his anger and incredulity after the final whistle, promising to include footage of the incident with his complaint to the Football Association.

Two minutes after the re-start, James Chester doubled Hull's lead after a counter-attack and Mackay's frustrations were compounded when Aaron Mclean added a third after breaking away from what appeared to be an offside position.

Hudson shared his manager's complaint but conceded the decision had no bearing on the result.

"But that's not here nor there, we were already 2-0 down at that point and trying to go for the game. But you can't play a team like that and give them a two-goal head start the way we did."

Tuesday's match was the first of three successive home match for Cardiff, who have slipped outside the play-off positions of goal difference.

Mackay's men, who reached the Carling Cup final in February, have now played 45 games this season but Hudson rejected suggestions the relentless schedule was beginning to take its toll.

"That could be just an excuse. We're a fit bunch of lads," he stressed.

"We've all been in the Championship before and played 40 or 50-odd games. Sometimes if it's not going right that can be picked up on.

"Obviously when we give goals away and try to chase the game, we can look a bit leggy maybe. But that's not something we feel.

"We feel fresh going into games and we'll give it all for the next 10 games."