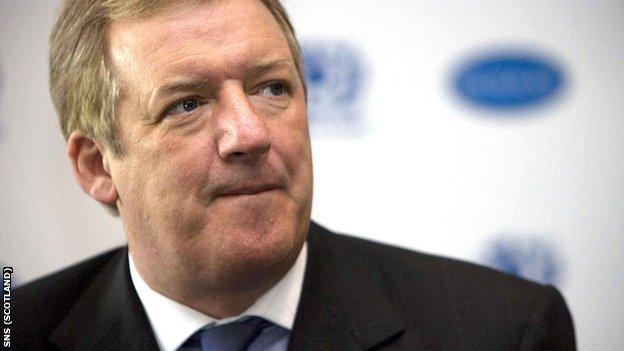 Murray insists he was "duped" by the Motherwell-born businessman before he handed over his majority shareholding in the Ibrox club for £1 last May.

Rangers entered administration on 14 February after HMRC lodged its petition over non-payment of around £9m in PAYE and VAT.

"I wish I'd never done the deal with Craig Whyte," said Murray.

Last Friday administrators Duff and Phelps confirmed management and players had agreed a wage-reduction deal ranging from 75% to 25% to secure jobs throughout the club, which needs to save £1m per month to stave off the threat of liquidation while new owners are sought.

At a press conference at his Edinburgh offices on Tuesday, Murray distributed a letter from Whyte's solicitors, Collyer Bristow, dated 3 January, assuring the former owner that obligations were being met by Whyte, who last week was found by the Scottish Football Association not to be "a fit and proper person" to run a football club.

The letter was signed by Gary Withey, who has since quit as a partner at the firm.

Whyte's pledges included paying off the bank debt and investing money in the squad and stadium but joint-administrator Paul Clark said at the weekend that they could see "no evidence of any investment by Whyte into Rangers".

Asked why he thought Whyte was the right man to take the club forward, after previously saying he would only sell to someone with Rangers' best interests at heart, Murray replied: "Because he met the criteria that were in his offer document. He's quite affable and plausible.

"I always remember someone said, 'Does it pass the sniff test?'

"He was Scottish, he wasn't a foreigner, he was supposedly a Rangers supporter, he had the money.

"There is a Stock Exchange offer document there. If you can't believe that, what can you do?

"Craig Whyte made a statement that the club was never in better financial state when he took it over.

"This is a guy saying he's going to spend money on players, on health and safety, do the ground up. That is a legal offer document. You would expect that to be honoured.

"The letter on 3 January is quite dynamite, because what they've done is confirm that they would deliver the deal they signed up to."

Murray insists he had no idea that Whyte had used Ticketus money to buy the club.

"The first I knew about Ticketus was when Martin Bain (former chief executive) asked me to do a precognition on his defence (in a legal case) against Craig Whyte, and it was brought to my attention at the end of December," he said.

"I signed a precognition in January with our lawyers present.

"But if we'd known of the Ticketus thing, we'd not have done the deal."

Murray was at a loss as to how Whyte was able to raise money from Ticketus before he bought the Ibrox club.

"That's a good question," he said. "People can be puzzled. But genuinely, none of us knew."

I can only apologise how this has turned out. And if I could turn the clock back, of course I would

Murray was then asked if alarm bells did not ring when former chairman Alistair Johnston and former director Paul Murray warned that the deal with Whyte was not the right one for the club.

Paul Murray failed in his bid to buy Rangers before Whyte took over but now heads the Blue Knights consortium who have expressed their interest in rescuing the club from the threat of liquidation.

"We did check, to the best of our ability," he said.

"After someone has been disqualified for seven years, it's not that easy to check.

"And it is also down to the individual, is it not, to make us aware of that?

"I'm not defending me - because I've made a huge mistake here.

"And if the information had been available to me at the time I wouldn't have done it. I did it in good faith.

"Again, I can only apologise how this has turned out. And if I could turn the clock back, of course I would. There's not much more I can say than that."

Murray, who took over Rangers in 1988, admits the state the club finds itself in has tarnished his legacy.

"Then we went into a tight period financially when I put a lot of money into the club.

"I have genuinely put just short of £100m into Rangers in my tenure.

"We all enjoyed a lot of success together. Now all of a sudden it's all my fault.

"I accept at the end of the day I was the captain of the ship, and I take my share of criticism."