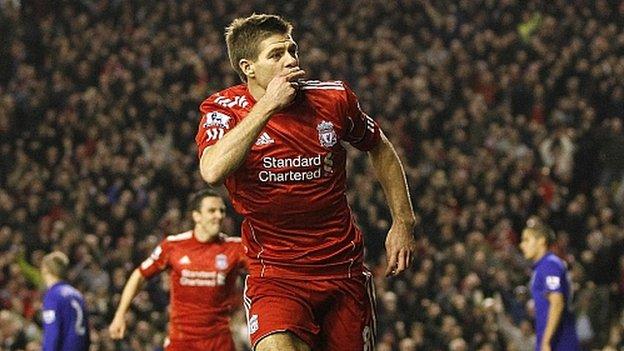 Liverpool manager Kenny Dalglish admitted he did not have the words to adequately describe the quality of captain Steven Gerrard's performance in the Anfield club's 3-0 victory over Everton.

BBC Radio 5 live summariser Pat Nevin had no such difficulty, calling the Reds skipper's three-goal display the best he had seen by any player this season.

"Honestly, you really can't beat that. I don't know what you can do in a game of football better than that."

It is not the first time Gerrard has used his skill, strength and determination to almost single-handedly drive Liverpool to victory, often saving his very best for the biggest matches. Here, we look back at five of the midfielder's greatest games. 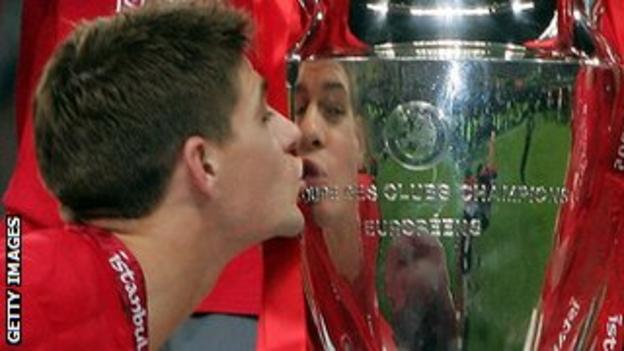 Liverpool were trailing 3-0 at half-time in Istanbul, but one man refused to stop believing. Grabbing his team by the scruff of the neck, Gerrard hauled Liverpool back into the match, heading the first goal to give them a lifeline before winning the penalty from which they equalised seven minutes later after Vladimir Smicer had made it 2-3.

In extra-time, Gerrard was moved to right-back to counter the threat of substitute Serginho and the captain defied his exhausted legs to put in a series a vital blocks. Liverpool won the match on penalties, leaving Gerrard to lift the club's fifth European Cup.

One year after the "Miracle of Istanbul", Gerrard showed his sense of theatre once again with an incredible late strike. With Liverpool trailing 3-2 to West Ham in the 90th minute, he latched onto a loose ball and smashed a 35-yard drive into the bottom corner of Shaka Hislop's net. The skipper then blasted home from the spot as Liverpool won a penalty shoot-out.

Liverpool would never have reached the Champions League final in 2005 if Gerrard hadn't bailed them out in the group stages with another last-gasp intervention. Needing to beat Olympiakos by two goals to get through, Gerrard hammered a 25-yard half-volley into the top corner after 86 minutes to seal a 3-1 triumph.

Another European night, another one-man show, as Gerrard came off the bench to score a 14-minute hat-trick in a 3-1 Europa League victory over a strong Napoli side. Brought on at half-time with his side trailing 1-0, Gerrard beat keeper Morgan de Sanctis to an Andrea Dossena backpass to net an equaliser. He then slotted in a penalty and chipped the goalkeeper to complete his hat-trick.

A 20-year-old Gerrard was already well-established in the Liverpool first-team when he cemented his place in the hearts of the Anfield faithful with a brutal 25-yard drive past Manchester United goalkeeper Fabian Barthez. Refusing to be overawed by a United midfield featuring Roy Keane, Nicky Butt, David Beckham and Ryan Giggs, Gerrard produced an imposing performance as Liverpool captured their first league double over the Red Devils for 22 years.