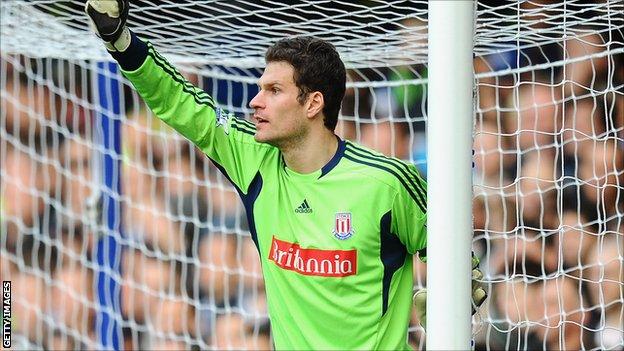 Asmir Begovic is hopeful that he will be chosen to start Stoke City's FA Cup quarter-final tie at Liverpool.

But manager Tony Pulis has often selected his back-up custodian for cup games, meaning Thomas Sorensen is likely to play at Anfield on Sunday.

"I don't know what the plans are but it would be fantastic if I get the nod to play," Begovic told BBC Radio Stoke.

"It's a big game for the club because a win would take us to Wembley again, but it's down to the manager and we'll leave it to him."

If we stick together and show our usual spirit and commitment, I'm sure we can pull it off

Sorensen, who won his 100th cap for Denmark in February, and Begovic have struggled to cement their place as Stoke's number one goalkeeper, making 23 and 22 starts respectively this season.

Begovic did not play a single game in Stoke's run to the FA Cup final in 2011.

Liverpool will go into the last-eight clash full of confidence after captain Steven Gerrard's hat-trick saw off Everton in the Merseyside derby on Tuesday.

The Reds knocked Stoke out of the Carling Cup in October, but the Potters have had the better of their two Premier League encounters, winning 1-0 at the Britannia Stadium and

"We have nothing to lose there because nobody expects us to get anything," added Begovic.

"We're going there with confidence because we've had a good couple of results against them this year.

"They're a fantastic side, especially at home, and with the players that they have it's going to be a difficult task.

"But if we stick together and show our usual spirit and commitment, I'm sure we can pull it off."