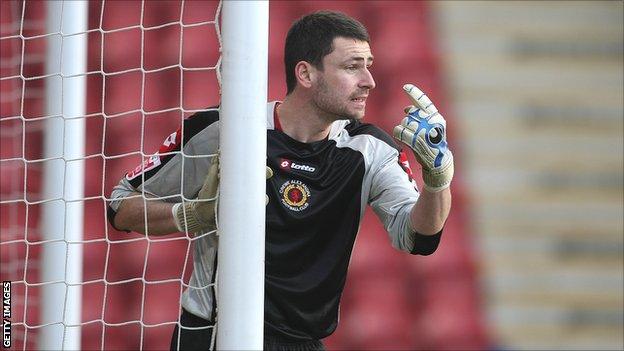 Steve Phillips has said Crewe's players are not discussing the possibility of reaching the play-offs this season.

With 10 games remaining, Steve Davis's side are three points away from a top-seven spot in League Two.

Goalkeeper Phillips told BBC Radio Stoke: "We don't tend to talk about the play-offs. We take it a game at a time.

"Since Steve's taken over [from Dario Gradi in November], we've had a little bit of a transformation in the way we play and it took us time to adapt."

Phillips continued: "We've had a few hiccups along the way, like against AFC Wimbledon.

"We should never be letting a two-goal lead slip at home and that was a massive disappointment.

"I thought we were going to do the same against Gillingham but, all credit to the boys, we were magnificent for the last 10 minutes and we thoroughly deserved to come away from a really tough away game with three points."

Teenager Nick Powell starred in the 4-3 victory at Priestfield, scoring two stunning goals to take his tally for the season to 11, while another 17-year-old, Max Clayton, headed a stoppage-time winner.

Powell picked up the League Two Apprentice of the Year prize at the Football League awards on Sunday, and Phillips believes he will go on to play in the Premier League in the future.

"He's as good as I've seen in 16 seasons as a professional at his age," said the former Bristol Rovers custodian. "He's probably the best 17-year-old in the country by a long way.

"He's an outstanding talent and he's been sensational for us.

"I've no doubt that Max and Nick have got a very good chance of playing at a massive club and for England as well."

"We need to be a lot better at trying to keep the ball out of our net. That goes for everybody, that's not me pinpointing the defence or the midfield.

"It's everybody collectively being a lot better at keeping the ball out of our net."