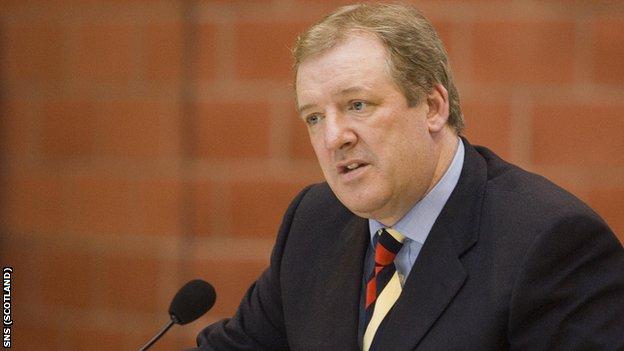 Sir David Murray insists there were never any hidden contracts for players during his era as Rangers owner.

The Scottish Premier League are looking into claims made by former director Hugh Adam that some payments were not included in registered contracts.

"I've asked the auditors to go through it. I've looked through every year to check my facts," said Murray, who left the Ibrox club last May.

"There was no double contract. There was categorically no dual contracts."

The payments allegedly left out of official contracts centred on the use of Employee Benefit Trusts (EBTs), which were the subject of a tax tribunal in January.

Rangers, currently in administration, are still awaiting the outcome of the case regarding offshore payments made from 2001-10, which could cost the club up to £49m and which has been termed the 'big tax case'.

The 'small tax case' is the £2.8m which first emerged last April, before Murray sold the club to Craig Whyte, due to similar offshore payments, but which has risen with interest and penalties.

The Scottish Football Association initially pledged to look into the matter but then stepped back after the SPL launched their own inquiry into the alleged non-disclosure of payments to players.

"That scheme is the subject of the small tax case.

"The Revenue provided some information to us in early 2011 and we conceded based on that information and provided for payment in the club accounts. Craig Whyte didn't pay it.

"The other, larger scheme, started in 2001, involves a payment into an offshore trust, but there is no contractual entitlement on the part of the players.

"The whole basis of an EBT arrangement is that there is not a contractual entitlement.

"That is key to the defence, and key to the allegations made by the SFA."

Murray claims he has yet to hear from the SFA or the SPL on the matter, saying: "I've never spoken to Stewart Regan (SFA chief executive) or Neil Doncaster (SPL chief executive) in my life."