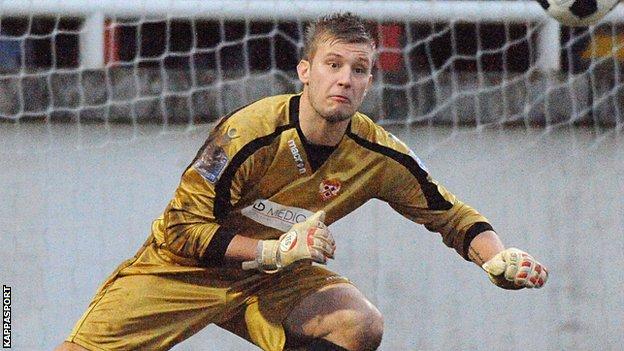 Kettering Town goalkeeper Laurie Walker says his side have not given up on their Blue Square Bet Premier campaign.

The Poppies are seven points from safety but ended a run of five defeats with a 0-0 draw away to Southport.

Laurie is proving his worth as a Conference, if not Football League, goalkeeper

Walker told BBC Northampton: "We show signs of so much quality. Things haven't gone right or been run right and we've had to get on with it.

"The lads want to make sure the club stays in the Conference, because that's where it belongs, if not higher."

He added: "I still believe we can get out [of the relegation zone]," said Walker. "We're going to give it a good go. We owe it to the fans, because they've been fantastic."

Players at the crisis club have had their monthly salaries go unpaid on more than one occasion this season, although the club say they are now being paid on a weekly basis.

"We've had the money issues but it's the best job in the world. You've got to maintain professionalism.

The 22-year-old made a string of saves in the draw at Haig Avenue to ensure the Poppies kept their first clean sheet in six league matches.

"The boys dug in for the whole 90 minutes and we're more than happy with a point. With all the problems going on, the performance was just immaculate.

"I had a decent game, but all the lads were top drawer."

"As a young goalkeeper he's got a lot of improvement in him, so he's certainly one for the future."

Walker also believes that the involvement of player and caretaker manager Westwood, and former Weymouth and Cambridge chairman George Rolls, is helping the club.

"They've both made a change to the club in making sure everything is done properly for the players on and off the pitch.

"I've been with George before, at Cambridge, and he's a man of his word. I think with him in the club, it's a very good move."