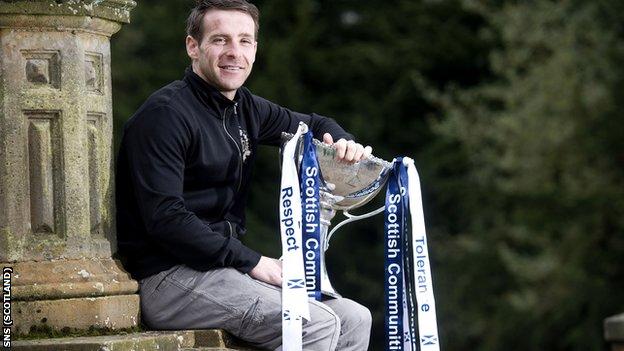 Kilmarnock stalwart Garry Hay is all set for a third League Cup final appearance when his side line up against Celtic at Hampden on Sunday.

Hay has been on the losing side twice before against Celtic and Hibernian, in 2001 and 2007 respectively, but he is hoping to make it third time lucky.

"We will use those experiences to try to gee everyone up," said Hay.

"I still remember now how I felt after the game against Hibs the last time. It was a sore one to take."

On that occasion, Killie were hammered 5-1, while the previous meeting with Celtic at the national stadium ended in a 3-0 defeat, with Henrik Larsson netting hat-trick.

Reflecting on the heavy loss to Hibs, Hay added: "It is probably the lowest I've ever felt after a football match."

The pitch definitely helps us, but then I think it will help both sides as Celtic are a passing side

While Hay has no plans to retire just yet, at the age of 34, he is all too aware that Sunday's final could be his last, so he is determined to make it count and is sure that his team can make a big impact on the game.

"In the law of averages it is most likely going to be my last final," said the versatile midfielder, who has been with Killie since 1995.

"So it is one for me to try and saviour. But then I will only saviour it if we can win."

"We have shown that we can score goals against Celtic and have performed well against them and hopefully on Sunday we can go one step further."

The visit to Hampden is a reward for the Rugby Park side's free-flowing style and the veteran believes the playing surface will only add to the occasion.

"The pitch definitely helps us, but then I think it will help both sides as Celtic are a passing side like ourselves, so I think it makes for a really good final," he added.

Being a local lad as well as one of the longest serving players at the club, Hay knows just how massive a win would be against Neil Lennon's men.

"It would be brilliant," he enthused. "I know how much it means to the supporters and the town as a whole to have a real sense of achievement, it would be something really special."