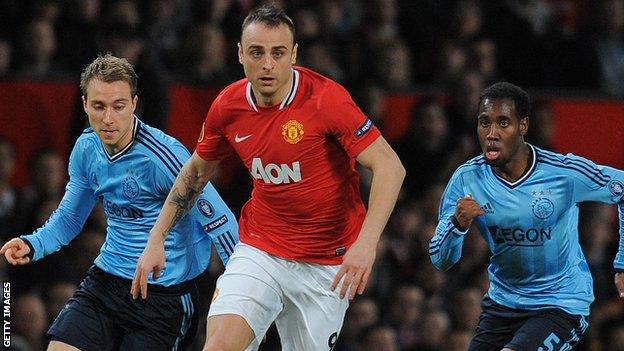 Dimitar Berbatov could leave Manchester United at the end of the season, according to manager Sir Alex Ferguson.

The Scot confirmed the striker is seeking first-team football, something he is not guaranteed at Old Trafford.

"At 31, he is looking at first-team football, said Ferguson. "It is difficult for me to guarantee that so it could lead to him looking elsewhere."

Berbatov signed for United in September 2008, arriving from Tottenham for a fee of £30.75m.

He scored 14 goals in his first season and featured in the club's Champions League final defeat by Barcelona.

He found the target 12 times in his second season before finishing last season as top goalscorer with 22, including hat-tricks against Liverpool and Birmingham and five in the 7-1 thrashing of Blackburn.

This season he has found himself behind Wayne Rooney, Danny Welbeck and Javier Hernandez in the fight for starting places.