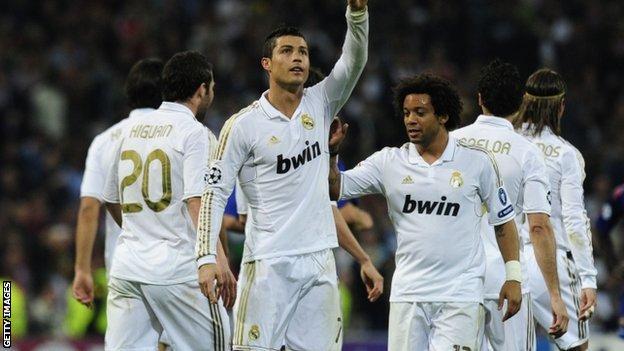 Real Madrid strolled into the last eight of the Champions League with an emphatic win over CSKA Moscow.

Gonzalo Higuain tapped in to put Real ahead before Cristiano Ronaldo's speculative long-range strike put daylight between the sides.

Ronaldo added a fourth but Xabi Alonso picked up a yellow card that keeps him out of the quarter-final first leg.

Karim Benzema scored 33 seconds after coming on - the fastest goal by substitute in this season's Champions League.

No coach has ever won the Champions League with three different clubs but given the astonishing run Real Madrid are on, Jose Mourinho will be confident of making history.

"We played a mature match. It wasn't anything out of this world but we're in the quarter-finals," said Mourinho.

"We suffered more than we should have until the second goal and the game was demanding until the end, but all Champions League games are. Now we'll take on whoever the draw pairs us with on Friday," the Portuguese added.

Los Blancos have now won 31 of their last 35 matches in all competitions, finding the net in every one of them - form that makes a La Liga and Champions League double a distinct possibility.

The latest visitors to the cauldron that is the Bernabeu, CSKA Moscow, started well with Seydou Doumbia firing over from 12 yards after Alan Dzagoev picked him out with an incisive through ball.

But Real curbed CSKA's early enthusiasm when a deserved opener from Higuain, who started ahead Benzema, gave them a 2-1 aggregate lead. The Argentine tapped in from Kaka's cross from the left after the Brazilian had been picked out by Sami Khedira's intelligent ball over the CSKA defence.

Madrid went up a gear in the second half and Ronaldo almost made it two when his shot was saved well by goalkeeper Sergei Chepchugov - before a careless lunge by Alonso saw him pick up the yellow card that rules him out of the first leg of the quarter-final.

But that was merely a blip for Real, who doubled their lead on the night through Ronaldo. The forward's long-range effort bounced in front of Chepchugov and into the net, leaving the Russian red-faced and the Portuguese celebrating.

Benzema then scored within 33 seconds of coming on as a substitute, a record in this season's Champions League. The Frenchman collected Mesut Ozil's sublime low cross from the right and, after his initial shot was saved, poked in the rebound.

Zoran Tosic produced a rare moment of brilliance for CSKA - rifling in a long-range effort off the underside of the bar - but it came too late to inspire hope on a night when the Russian side lacked the quality to trouble Real.

Deep into stoppage time Ronaldo tapped in Benzema's centre to score a fourth - the seventh consecutive game in which he has scored - and seal Real's 5-2 aggregate progress.