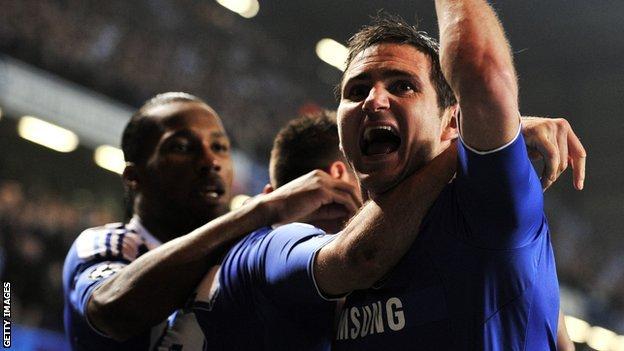 Chelsea interim manager Roberto di Matteo praised his "incredible" players after they beat Napoli 4-1 to reach the last eight of the Champions League.

Branislav Ivanovic scored an extra-time winner to send the Blues through 5-4 on aggregate after Didier Drogba, John Terry and Frank Lampard had all scored.

"Some of the players couldn't run at the end because they had cramp but they just kept fighting," said the Italian.

We proved we're a team. That desire, that togetherness. We showed what Chelsea are made of

"We knew it would take a lot to win but everybody was incredible."

Trailing 3-1 from the first leg in Naples, Chelsea opened the scoring through Drogba's header.

Lampard forced extra time with a penalty following Andrea Dossena's handball, and Ivanovic smashed home on 104 minutes to win it.

Terry had spoken before the game of how it could become one of Chelsea's great nights and afterwards he said: "This could top them all, for sure.

"The lads put in a great display, really solid, really resilient, with the firepower going forward.

"We proved we're a team. That desire, that togetherness - we showed what Chelsea are made of."

The Blues have endured a difficult season, with manager Andre Villas-Boas sacked after the Premier League defeat by West Brom.

But they remain in contention for a top-four finish, the FA Cup and now the Champions League.

"It's absolutely huge," said Lampard. "It was essential we showed a desire and spirit to keep ourselves in the competition.

"It has been a difficult season but a performance like that tonight can change things for us so it's important we go on from here.

"If we play with that ability and desire, we can take on anybody."

At the final whistle, Di Matteo ran on to the pitch and embraced all of his players.

"It meant a lot for the club to still be able to play in the Champions League," he added. "You could see how much it meant to the players.

"I think everybody was very happy and delighted that we managed to stay in the Champions League after putting on such a big performance tonight.

"I've had some great nights but I think it will probably go down in the club's history.

"You saw the players tonight, how they performed.

"To have come back from a two-goal deficit from the first leg, they showed passion, that they care about the team, the club, the supporters. It gives us a big boost going forward."