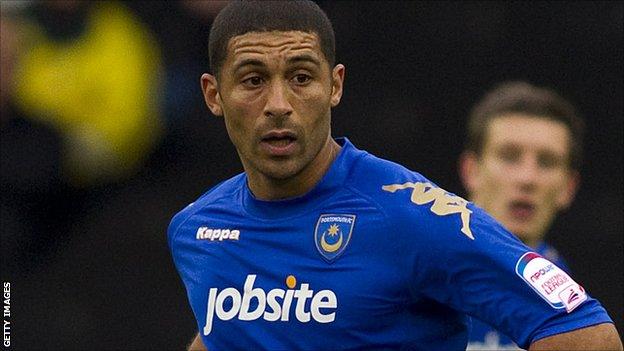 Reading have signed versatile Portsmouth midfielder Hayden Mullins on loan until the end of the season.

Portsmouth, who were placed into administration last month, are currently bottom of the Championship.

"We are delighted that Hayden has signed," said Reading's director of football Nick Hammond.

"We have known him for a long time and he has come close to signing on a few occasions in the past.

"He has great experience and also versatility. Importantly as a person he will also be a very god fit for our group."

Mullins began his career at Crystal Palace in 1996 before joining the Hammers in 2003.

Pompey joint administrator Trevor Birch said: "This is another decision that has not been taken lightly. I feel desperately sorry for the supporters that we are in this position.

"Although the outlook is slightly brighter than it was a few days ago, the club is still spending more than it is getting through the door. As administrators, it is PKF's job to stabilise the situation as quickly as possible and then start to restructure the club's finances on a longer-term basis.

"This deal makes a difference on both of these fronts. This is solely about increasing the club's chances of survival.

"The fact is that every pound the club receives - whether it's through loan fees, league monies, tickets, merchandise, sponsorship or programmes - buys us more time and gives us the chance to restructure the cost base so that the club becomes a more attractive prospect for a potential buyer. Every pound that we're able to save has the same effect."

Pompey boss Michael Appleton was also sorry to see Mullins leave, and wished him well at his new club.

"This is a good opportunity for Hayden to play a part in Reading's battle to get into the Premier League," said Appleton.

"He has been a good servant to this club and was very happy here. He didn't want to leave the club.

"But we all know about the club's financial situation and this move will help to bring in some money to keep the club going."